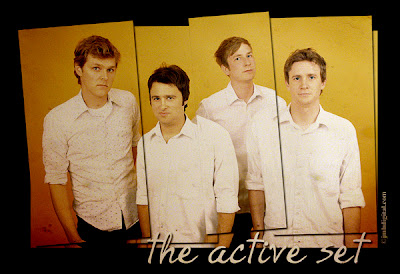 "11"
I walked into this bar outside big town everyone has heard of, but by the end of the night couldn't remember where... what they could remember was the headliners "The Active Set". I wander back to a door that says "cool people only" I naturally thought about it for a second, and I looked around at quickly ran in. As I walked down a hallway reading door to door knowing my plan was to talk to the headliners I came to the door at the end that had a piece of thick tape and the black marker words "The Active Set"... I knocked and was greeted...

Hey Guys... would you mind if I asked you some questions... I heard sure come on in...

-Tell us about the band and your personal favorite things?

MS - I love a variety of things, and the boys are down to get eclectic. No one is too rigid here. Also, we are punctual.
WR - Football (soccer) West Bromwich Albion. jeeps. Buying things
FR - The Active Set gives me a little different perspective on bands and music. We are all over the place with our music. I'm not sure if that's a good thing or bad thing but I like it.
MC - This band has such a myriad of influences and tastes..we try our best to throw it all into the stew to make a delectable and succulent audio dish.

-What are some of groups/bands you were part of before, how is working in "The Active Set" differ?

MS - I helped start the Briggs. Left to escape monotony. Also had a short lived band called Language Room. It broke up due to personality conflicts. We couldn't be more different in the Active Set, but we all respect each other and do a pretty good job of listening to each other.
FR - I was in a band called Champion The Average. The song writing is easier with The Active Set.
MC - I started a group with a buddy in Oakland, Ca in 2005 called 'system3' based solely on Roland Juno arpeggios, very electronic and organic based; i discovered a vast landscape of music possibilities and it greatly expanded my capabilities and playing; this is when I started playing live electronic percussion sounds with my acoustic kit to form a great hybrid drumkit; i brought this to the Active Set because it's a wonderful thing.

-Best and worst parts of making the video "Famous For Dying"?

MS - Best part was the cast and crew. It could not have been a more relaxed/enjoyable environment, and I really felt the cast 'went there' with their roles. The worst thing was the mess, and actually bite marks left on my face for days.
WR - Best - fun to get eaten alive, zombie fan so to make something with zombies was great, Francis couldn't make it
Worst - fake blood removal is difficult. A good shirt was ruined. Francis wasn't there
FR - Best parts: Watching my bandmates get killed and eaten. Very cathartic for me. Worst parts: I wasn't in it - (had a family obligation on the day of shooting)
MC - Best parts: acting and living out childhood dreams of being part of great music videos; working with wonderful and talented people/friends Worst part: getting bloody and gooky and messing up my stuff and having to clean it.. and not coming back to life as a zombie to rock out in the video after being ravished by zombies.

-Who do you listen to personally [music] and your musical inspirations/influences?

MS - Let's just go with what I've been listening to lately: Absorbed in the Ziggy-era Bowie catalog. Also, Chairlift, the Drums first album, Butch Walker. I was so engrossed with older music for years, I'm proud of myself for being somewhat current.
WR - Radiohead, libertines, wilco, Sigur Ros, bloc party, deerhunter, a lot more, the list changes hourly probably
FR - At The Drive In, Sunny Day Real Estate, The Killingtons, Muse, Sigur Ros, Does It Offend You Yeah, Eazy-E, U2, Gorillaz
MC - Pinback..Phoenix..Zappa..Aphex Twin..and a host of deep cut long forgotten or undiscovered soundtrack/instrumental pieces from 80s, 70s, 60s

-Where do you see or want to see "The Active Set" going in the future?

-Fan response to the video "Famous For Dying" and some of the cooler comments about it?

MS - I love how 'interactive' it is. It seems everyone has an opinion about it: it's length, what happens, etc. I'm pleased to have something that engages people, and that they feel they have to express an opinion about.
WR - I've heard mixed, people that like horror totally got the ending and loved the gore. Someone almost threw up, probably because the acting is so convincing or something. Somebody didn't like it because our friends are the zombies.
FR - I liked the guy who got all up in a bunch when Matt knew he was going to comment about the concept. (On YouTube)

-Strangest fan requests, that made you raise an eyebrow?

MS - Songs? Hmmmm. Nothing too out of the ordinary. Someone asked for a Libertines cover recently.
WR - Fans avoid me. They talk to everyone else but me.
FR - To take us back to their place and make pancakes at 2 am :-| - We didn't go
MC - To cover Kenny Loggins

-Out of all your music, which do feel is your best work?

MS - This new album took a while to get done, but it was worth it. We are quite pleased. It is a perfect snapshot of where we are and where we're going I suppose.
WR - New album, it's a band effort and that's a good thing
FR - I like all for different reasons.
MC - Best Summer Ever, Counting Out Your Life (from 11)

-Advice that some gave you, that you would pass along to someone you just met?

I wanted to thank them all... Matthew, Wayne, Francis, Michael and Steve for pulling it all together... getting me those great seats and the backstage passes. Much respect and success to you all! 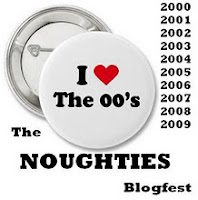 Noughties Blogfest
Host By: Dave of "Dave Wrote This" "http://davewrotethis.blogspot.com"

Now I have been racking my brain on what direction I should go, because if you know I never do anything that is normal. I try to find the twist and turn, some kind of angle... I am pleased to present my list of Noughties...
My choices for the top epic soundtrack scores for each year, now [for those who don't know] the score is the just the music that helps the film along. Not to be confused with the soundtrack that features songs that help new artist get recognized with a few classic songs... mostly re-done classics. I went with "EPIC" film scores, because they are mostly films you have heard of and represent a larger scale budget.  I am a fan of score music and have large variety of musical taste, so these are my choices. 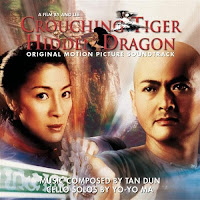 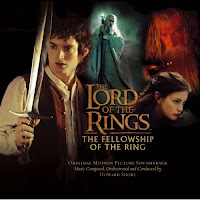 2001 - The Lord of the Rings: The Fellowship of the Ring - Howard Shore 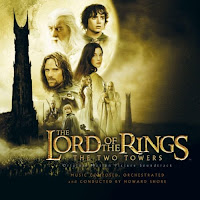 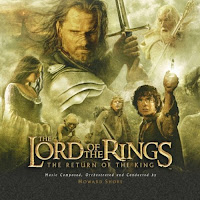 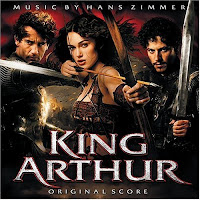 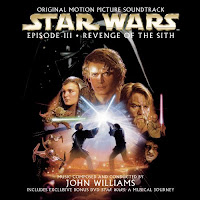 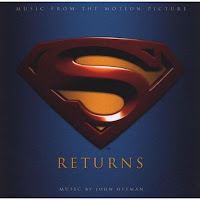 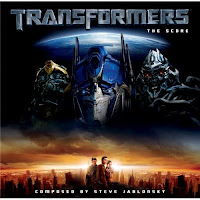 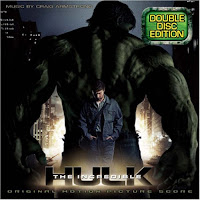 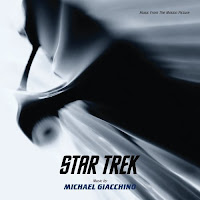 Just a couple things you might want to know on some of the choices that I have made that if you were to want any of these scores. Starting with the "Lord of the Rings" series, they are all available in huge "Expanded" versions and two more versions that Howard Shore released (Lord of the Rings Symphony and Book: Music of The Lord of the Rings Films). Second "Superman Returns" may not be the best film out there, but John Ottman's vision is great and the way he incorporates in John Williams themes.
Third the score for "Transformers" was not mass produced so it is a little hard to find for a descent price, but it is one of the best of the three films. Forth "The Incredible Hulk" is like one of the first "CDR" released scores, I believe there might be regular printed versions... I have never seen it. Last "Star Trek" it also comes as a single Cd and as a "Expanded" edition and represents many of the original score and incorporates some great epic themes.
Now you may be wondering where "Harry Potter"  is or how come "Pearl Harbor" are not in this list... I agree "Harry Potter" should be here, but this is the overall list from me. I hope you enjoyed it, samples of each of the scores is on Amazon... I encourage you to check them out.
Trading is Welcome!
Jeremy [2Thumbs]
Hosted by Unknown at 1:01 AM 14 COMMENTS