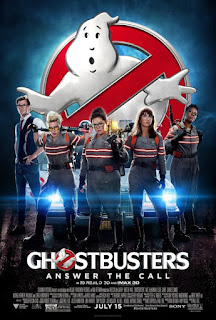 Beware!  There be spoilers ahead!

The new GHOSTBUSTERS is not funny or imaginative.  You kind of need those two main ingredients for a good Ghostbusters film.  The jokes falter due to over reliance on improvisation casting suspicion that there wasn't much of a script to begin with.  The jumbled, poorly paced, nearly incoherent story is evidence of that.    Worst yet the characters have very little on screen chemistry and provide absolutely no laughs no matter how hard they try.  Being a Ghostbusters fan I wanted to love this movie but I couldn't.  To put it bluntly this film insults the fans of the old generation while dumbing down the new.

As the film plays before your eyes you can't help but imagine better ways to tell a story about the Ghostbusters.  It would be so easy to put out a third film in the franchise and still have the four protagonists be the new all female Ghostbusters.  We wanted a sequel.  What we got is remake that is suppose to reboot the franchise.  Oh, goody!  We get the same old story of four friends getting together to form a business about catching ghosts and at the end a big giant thing stomps through the streets of Manhattan.  I guess that is the only story that can be told about the Ghostbusters in movie form.  They have told this story three times now!  If you stay to the end you get a mention of Zuul during a post credits scene.  Oh, no!  Ghostbusters is a prequel!!!  What is the deal with Sony and their reboots?  It takes two movies to tell one story that has already been told in a previous film.  It took two new AMAZING SPIDER-MAN movies to equal the amount of narrative put to screen in the first Sam Raimi Spider-Man.  CLICK HERE TO READ THE REST.....