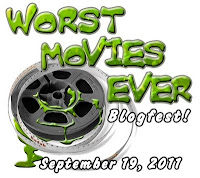 
Before you go flying of the virtual handle, let me explain my thinking... these films made millions of dollars and I had no interested in seeing any of them. Now you may have loved them for many different reasons, I am one of those people that said... ugh, no! Mostly cause the are considered "Chick Flicks" and for me if something isn't being blown up or a hint of a giant fighting robots... well this is were I say again, ugh, no!
These are the ones I had to sit and watch and they are not in any particular order and I gave you an option for another film [though some are just as girlie]: 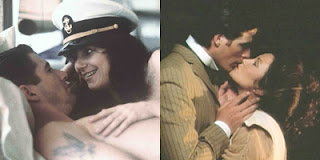 AN OFFICER AND A GENTLEMAN
alt: Somewhere In Time [love story that gets killed by a flip of a coin, sort of a spoiler] 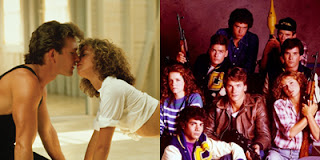 DIRTY DANCING
alt: Red Dawn [yes they were both in it] 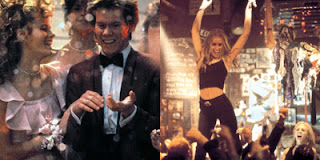 FOOTLOOSE
alt: Coyote Ugly [the girls look much better in a wet t-shirt] 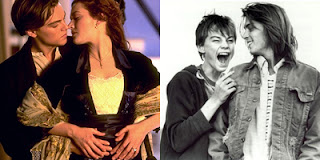 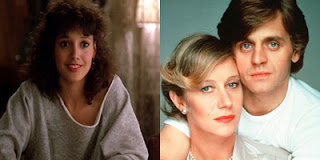 FLASHDANCE
alt: White Nights [well they dance for their lives, too] 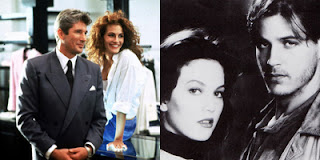 PRETTY WOMAN
alt: Streets Of Fire [I would pick this for any boy meets prostitute movie] 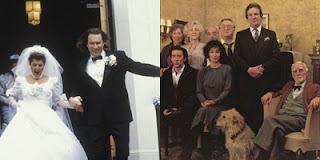 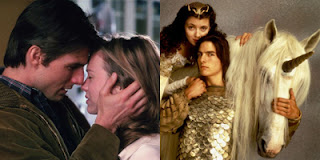 JERRY MAGUIRE
alt: Legend [if it's a fantasy film, why not go with Legend...
you know the truths/rumors about Cruise] 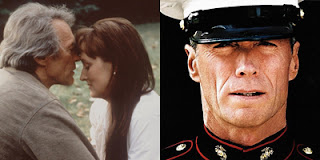 THE BRIDGES OF MADISON COUNTY
alt: Heartbreak Ridge [well at least they are outside in both] 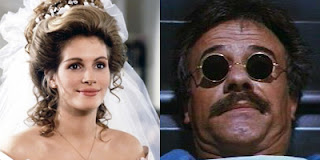 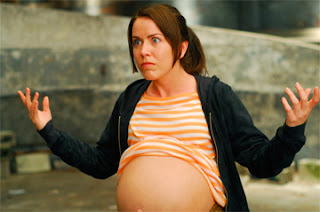 Email ThisBlogThis!Share to TwitterShare to FacebookShare to Pinterest
Labels: Worst Movies Ever Blogfest

Those were funny, Jeremy - 'boy meets prostitute movie!" I did like Jerry Maguire, but Legend is a better choice.
Thanks for participating in the blogfest!

lol- Eh, mixed feelings. Some of those chick flicks even I won't watch. And chick flicks are just about the only movies I enjoy- best if they're as shallow as a kiddie pool:)

LOL What an awesome list. I love your alternatives. Yes, red Dawn is much better than Dirty Dancig, though I do love the dancing. Yeah, I'm showing my chick card.

I love how you went about this. Most of your alternatives are great choices. I can't believe you like Cool as Ice, though.

"Ditch the zero, and get with the hero."

While I can't really agree with many of these, it is still funny. I only like most of these chick flicks because they are 'classics'. If I were to see them for the first time today, I might think "WTF" was I thinking?!

There was football in Jerry McGuire. I liked officer and Gentleman from what I remember.

Those are some awful chick flicks! I did like Weekend at Bernies. Laughed my arse off on that one.Hey, Santa Clause Conquers the Martians. Okay, seems like some people did like that one.

I'm a chick and totally agree with your list. Chick flicks are the WORST. I hate it when people assume that just because I'm of the female orientation that I will enjoy watching these movies. Uh no no I won't. lol

I did like My Big Fat Greek Wedding though.

Finally, a list where I've seen all of the movies and actually liked most of them. I have to admit, though, that Clint Eastwood's weather-beaten, wrinkled face put me off a bit in Bridges of Madison County. :)

awww, but red dawn was so bad it was good! lol.

I have seen a few of your film choice on TV and to be honest liked them. If we all liked the same life would be boring.

I'll do my best to hide your list of worst movies from my wife. She absolutely adores Dirty Dancing. I understand what you mean about needing giant robots and fiery explosions in a movie, though.

I love that you put alternatives on this list. Brilliant.

I actually liked Dirty Dancing and My Big Fat Greek Wedding. I thought they were fun. Titanic sucks big time.

I did like a few of these movies, but it's cool to see how everyone's taste differs. I like how you approached the topic by giving alternatives. Great format, sir!

ohman! legend is soooooo good!
i actually haven't seen many of these chick flicks... but they don't seem interesting to me, and whoohoo for red dawn over dirty dancing!

I do agree with Bridges of Madsion County! After reading the book, I had no desire to see the movie due to the casting of the romantic leads. I also agree that some of the worst movies actually make for the most fun! Nice meeting you through the blogfest! Julie

I agree with you about all of those films and I'm a woman. I don't do chick flicks. Great list idea!

Chick flicks never held much appeal to me, and I'm female. :P

I'm not sure I'd consider Footloose a Chick Flick myself, but I agree with your choices. Especially anything with Julia Roberts. To say I'm not a fan is the understatement of the century.

But anyone who says they weren't astounded at the effects of the sinking of the Titanic after seeing it on the big screen (leaving the love story aside) is lying. :)

Something tell me you don't like the mushy stuff. :) I loved all these movies.

Those are some sappy romance movies. I think I've seen them all, too. Of these, Heartbreak Ridge and What's Eating Gilbert Grape are probably my favorites.

Great list! While there are some I like very much, I definitely like the guys point of view of alternate choices. My husband would really agree on all of the above. :)

Very funny spin on the blogfest!

I loved Officer and a Gentleman, Dirty Dancing, and Jerry Maguire, though.

I have to give you two thumbs up for your list just because I loved your execution :-)

By the way, totally agree with Legend as the better choice.

I liked anything with Patrick Swayze in it. :D

I agree on Plan 9. I love those old, bad sci-fi flicks. They're the best.

Really, Sex & the City is coming back? I think I heard my husband screaming.

As a guy, it took cajones to admit that you loved Glitter and From Justin to Kelly. I bow to your bravery.

I see we have a few of the same on your worst considered list. I really thought that I was one of the few people who hates Dirty Dancing. I freaking hate that movie and that stupid line about putting baby in a corner.

However, I do like Patrick Swayze, God rest his soul.

As a chick, I loved most of those movies.

And your Alt, Weekend at Bernie's, is great -- well as long as it's the second one. I had a pit boss who looked just like Bernie in the second flick. I'd ask him to do the Bernie dance... funniest thing I ever saw. Customers loved it too.

I freaking hate chick flicks, but thank God Adam Sandler does them -- I can enjoy them with my wife :)

Funny way to do this blogfest. A+ for creativity. C for choice in movies LOL, just kidding.

Thank you for having the courage for calling so many blockbusters the crap that they are!
Got to disagree about Highlander II: the Quickening. Ugh. My friends and I dubbed Highlander III: "The Apology"

I think I've seen all the chick flicks AND the alternates! But, I can't say any of them would have made my "worst movies" list. I'm a sucker for a love story of any kind, I guess... :)

Dirty Dancing bleoh..
It's also clear you don't like much Richard Gere, I don't really blame you :).

Not all of those are terrible, but good read! I would have liked to have been a part of this athon!

I love Somewhere in Time. Love it. And Steel magnolias is one of the best chick flicks ever made.
But hey, I won't hold it against ya since you're a dude. ;)

This is pretty funny. I enjoyed seeing the alternates. I am guilty of enjoying some of these though- I guess thats ok because I make up the "chick" part of "chick flick" right?