THE NEON DEAD is worth a look! 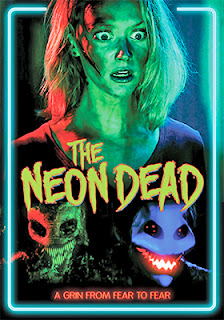 When it comes to low budget movies made by people who actually care about film I am very forgiving.  Low budget films obviously have more challenges and obstacles to overcome to get made and shown in the public eye.  I am a big believer in art through adversity.  The challenge and limitations from the lack of money and resources can inspire wonderful results.  THE EVIL DEAD is a terrific example of this.  I am always looking to low budget films for inspiration since I myself am part of the world of no budget film making.  I want more people to know about the good ones and get motivated to support these films and maybe make their own.  I am looking for horror movies that are not homages or at least influenced by THE TEXAS CHAINSAW MASSACRE.  I like that film but it has been too big of an influence on many horror films in the last 20 years or so.  There are so many horror film makers that seek to out shock that classic movie through the on screen suffering of characters that a new genre of horror was created.  Torture Porn.  You can't count the number of horror movies whose plot summary is about a group of young teens and twenty-somethings who go out to the middle of nowhere and become the victims of a crazed cannibal inbred family of yahoos.  I bet there are more movies about crazed cannibal inbred families than there are about Dracula and Frankenstein combined.  People looking for new ideas to be inspired by to create new kinds of horror need to limit their intake of such films unless they just like that kind of film.  I myself like the WRONG TURN movies for some reason.  But if you are looking for something new and different I would recommend THE NEON DEAD.

When Allison discovers a violent ghost in her house she calls Desmond and Jake, an amateur paranormal exterminating duo, to find out what is going on in her house.  The investigation leads our two ghost fighters to uncover the bigger problem of an interstellar demon trying to get to earth and destroy all life as we know it.  CLICK HERE TO READ THE REST.....