Missy Hill  [Actress]
UNICORN CITY: THE MOVIE
Missy Hill grew up surrounded by theater & performing. A student of The American Academy of Dramatic Arts in LA, she's been acting since age twelve. Her latest credits include: Grandmother in the SAG film, An Evening With My Comatose Mother, The Modern Adaptation of Aesop's Fables, REPO! The Genetic Opera (Shadowcast), Lola in the independent short, Op II, Sally Bowles in the theatrical production of Cabaret, and Connie in the theatrical production of Crazy Eights.

-Tell us about your career and what you are currently working on or involved with?
I started acting at 18yrs old. I grew up with a mother who was an actress & she refused to let me pursue a career professionally until I was 18. I studied at The American Academy of Dramatic Arts in Hollywood, CA. as well as privately studied with Andrew Benne in LA & Douglas Caputo & Jeff Johnson in Utah. Most of my past experience is in Theater, until recently. After Unicorn City, I was used as the face for the lead character in a recent graphic novel called TYNK & I landed the part of MOTHER in a SAG Independent Short, AN EVENING WITH MY COMATOSE MOTHER, which has also done extremely well with the critics & in the film festival scene, including two recent awards for which I've won: Best Supporting Actress & Best Transformation In A Film. Currently they are adapting AN EVENING WITH MY COMATOSE MOTHER into a full feature, as well as adapting the graphic novel TYNK into a full feature.

-Is this what you thought you would be doing with your life, what was your first passion?
This has ALWAYS been my passion since I was old enough to remember. Growing up with a mother who acted (and is VERY talented to boot), I have endless memories of watching her rehearse & perform my whole life & thinking to myself that one day I was going to become an actress too & I never waivered.

-To whom do you credit your success to, who gives or gave you the most support?
There are numerous people who deserve credit for the success I've had. All my teachers, my friends, The Leflers, etc. But my parents are the ones who deserve the MOST credit. They've NEVER doubted, never judged my choice of career when most others did & they ALWAYS helped me in whatever way they could. Without question, their unending love & support keep me going.

-If you could meet or work with [living or dead], who would that be and why?
Ooooh how I hate questions like these....but ok, let's see....ok, I got it! DEFINITELY, hands down Darren Aronofsky & The Coen Brothers! Oh & Jeff Bridges & Meryl Streep too....Ya, I know that's not just one person, but that's why I hate these kinds of questions.

-When you were growing up, what was your favorite role playing game and character, if not role playing... what game [Monopoly, Clue, Uno, e.t.c]?
You're gonna laugh at me for this because everyone does, but although I loved board games (and charades was one of my favorites), my favorite game to play as a child was the game of pretend. I'd make up COUNTLESS things to play pretend with & was able to completely lose myself in it. Still makes me smile thinking about it!

-How are things different today, than the same day 1 year ago?
There's been a change of scenery & location, new friends, opportunities to travel & new projects to work on....but definitely a bigger smile.

-What is the last song you bought or listened to in your musical device?
Imogen Heap's song Hide and Seek

-Last good film you had seen, and the best movie you would recommend to someone asking?

Last good film I saw was True Grit & the best movie I'd recommend to someone would be (and this depends on the person really), I guess...Requiem For A Dream.

-Tell us your role or involvement in "Unicorn City"?
I played the role of Angie, Marsha's best friend and Pat's girlfriend in the movie Unicorn City.

-Favorite Memory while working on "Unicorn City"?
Swimming into the pool wall at the cast party! I had a HUGE egg above my left eye, haha! Just goes to show how much icing something truly is effective. You couldn't tell at all in the film. But in my defense, it was night, the water was dark & my eyes were closed! 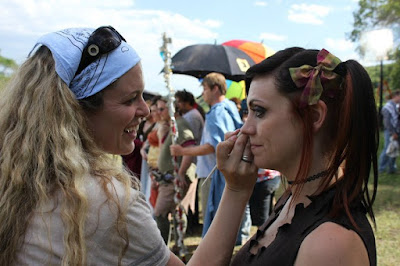 -Favorite Film Fantasy Character?
Ludo from the film The Labyrinth

-Favorite Thing In Your Home?
My Dartmouth sweater, given to me by Emilie Lefler

-Favorite First Pet?
My dog Maggie (half Shih Tzu, half Pekingese) & my BIG cat Bowie! I miss & love them BOTH!

-Favorite Prop you used while working on "Unicorn City"?

My Bow & Arrow. It was fashioned out of a hockey stick, the spine of a binder, a pencil, a bungee cord & a ruler AND it worked. WICKED AWESOME!

-Favorite Phrase during the filming of "Unicorn City" [from you or other cast/crew]?
"Ah, Unicrap City! Looks just like the brochure." (by Jon Gries who played Shadowhawk)

-Favorite Hiding Place?
In real life or in the film?....umm ok, I'll give you both. In the dryer & behind the costume trailer on set.

-If you could tell someone something someone told you, "words to live by" what would that be?
It would be a toss up between, "MISSY STOP!...that hurt didn't it!?"...or..."Don't pee into the wind!"

IMDB.COM - MISSY HILL
Hosted by Unknown at 4:24 AM

This was a great, enjoyable interview. Such interesting answers to your questions. I am intrigued by Unicorn City and have got to see it.

Glad she has a bigger smile now! Hiding in the dryer though? If someone turns it on, I hope she enjoys fair rides.
Good interview, Jeremy!