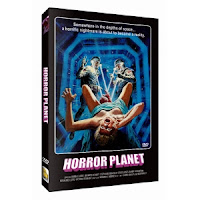 Horror Planet [1982]
Years of waiting are over... terror has begun.
http://cheezyflicks.com/


A six man, six woman planetary exploration team is investigating possible origins of a remote, desolate planet's apparently long-vanished civilization - so far, however, nothing has been found but a silent, lifeless world. Or so it seems. Unbeknownst to the explorers, a strange alien creature has been waiting patiently in stasis for millions of years, biding it's time until conditions are suitable to breed... and it's time has finally come. When the creature is accidentally awakened, it viciously assaults one of the crew members, and the horror that follows is more terrifying than anyone's worst nightmare. Especially for one unfortunate crew member with more than her own life to fear...
Thoughts: This is one of those films you loved from the eighties, because the success of films like "Alien" makes it possible for this film to be made. Will you like it better than "Alien" probably not... will you find in entertaining, I say if you like the cheese... then yes!
------------------------
------------------------
Hosted by Unknown at 11:29 AM