A TASTE OF KILLING needs a re-release! 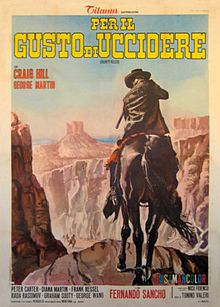 Tonino Valerii has directed about five Spaghetti Westerns in his day.  DAY OF ANGER aka GUNLAW is probably his best with the help of the two main stars Lee Van Cleef and Giuliano Gemma.  His most famous is MY NAME IS NOBODY which stars Henry Fonda and Terence Hill and may have been co-directed by Sergio Leone.  It is terrible and boring.  The ending is good but it belongs in a better film.  The movie as a whole is bad which is why I find it strange that so many critics familiar with Italian Westerns would often have it ranked somewhere in their top ten lists.  I guess they need to see more Spaghetti Westerns.  If they had then maybe they would have seen the far more satisfying A TASTE OF KILLING.

The film stars Craig Hill (A sort of cross between Eastwood and Bronson) as Lanky, a bounty hunter who has been tasked to protect a shipment of gold locked in the town's bank vault from a small army of bandits.  The leader of the bandits, Gus Kennebeck (George Martin) also just happens to be the man who killed Lanky's brother back in the day.  Time for some payback, right?  Well sort of.  Lanky may not be the hero we have been so accustomed to in other Westerns from Italy.  CLICK HERE TO READ THE REST!