The Kids In The Hall [Return] 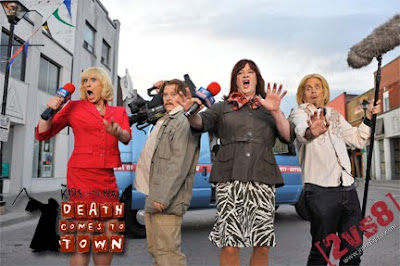 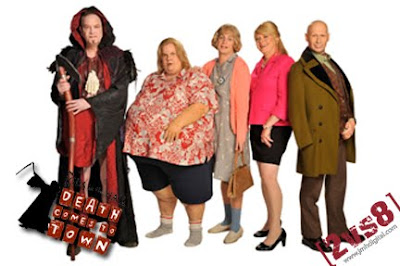 “The Kids in the Hall”
Reunite on IFC
“Death Comes to Town,” an 8-Part Original Series
Premieres August 20, 2010 at 10PM ET/PT with two back-to-back episodes All Five “Kids” Together Again on U.S. Television; Comic Murder Mystery Introduces All-New Narrative Format Shortly after the arrival of the Grim Reaper to Shuckton, Ontario on a Greyhound bus, everyone in the small town is implicated when one of its most distinguished citizens is found murdered. Death Comes to Town, an original scripted series of eight 30-minute episodes, premieres on IFC on August 20 at 10:00PM ET/PT, marking the return of the audacious comedy troupe The Kids in the Hall to U.S. television for the first time since their cult series ended in the mid-1990s. Famous for their distinctive and surreal sketch comedy, all five original members of The Kids in the Hall — Dave Foley, Bruce McCulloch, Kevin McDonald, Mark McKinney, and Scott Thompson — star in IFC’s new scripted comedy series and play almost all of the characters in their trademark gender-bending style. Co-written by all five Kids, the story of Death Comes to Town unfolds in a serialized format, different from their previous work on television, that uses “act-enders” to carry viewers forward to the next episode.
“It’s a gothic comic mini-series,” explains Bruce McCulloch, Executive Producer. “Like ‘Corner Gas’ meets ‘Twin Peaks’. It’s silly and it’s dark, and it’s about outsiders and people in over their heads.” “It is still very much a Kids in the Hall troupe effort,” adds Dave Foley, “As long as what we’re pursuing is what we think is really funny, that’s what keeps us honest.” Death Comes to Town was conceived by Bruce McCulloch, who is also executive producer. The series is directed by Kelly Makin and produced by Susan Cavan of Accent Entertainment.
I’m crushing your head. I’m crushing your head. Crush. Crush…
Hosted by Unknown at 2:45 PM

me too... they should have never stopped!