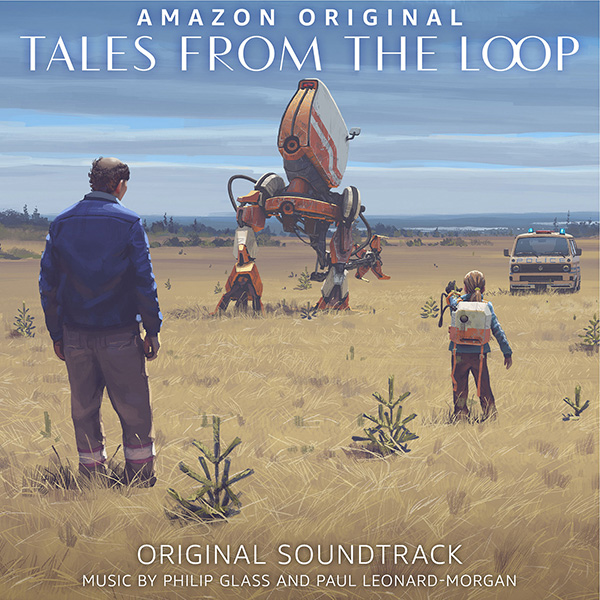 Fox Music/Hollywood Records today released the digital soundtrack from the Amazon Original series, Tales from the Loop.  The album features original themes by Philip Glass and score by Paul Leonard-Morgan and is available.

Tales from the Loop is now streaming exclusively on Amazon Prime Video in more than 200 countries and territories worldwide.

From executive producer Matt Reeves and based on the acclaimed art of Swedish artist Simon Stålenhag, Tales from the Loop explores the town and people who live above “The Loop,” a machine built to unlock and explore the mysteries of the universe – making things possible that were previously relegated only to science fiction. In this fantastical mysterious town, poignant human tales are told that bare universal emotional experiences, while drawing on the intrigue of genre storytelling.

Leonard-Morgan said, “Collaborating with Philip Glass on Tales from the Loop was an incredible experience. Philip and I had a discussion with Nathaniel Halpern (showrunner) and Mark Romanek (executive producer) about their vision for the show, the incorporation of unusual instruments, and their shared desire of wanting the soundtrack to be an integral part of the show: ‘Music which could be listened to by itself, melodies which could be hummed, a soundtrack which will stand the test of time apart from the series.’ Philip went and scored a bunch of initial ideas, as did I, and we discussed where they all might work together. Both of us playing off each other’s sounds and melodies to create a truly unique score. Over and again, we kept coming back to the original idea: to make beautiful music, which would work hand in hand with Nathaniel’s brilliant visions and beautiful cinematography. The 8 episodes are so unique—they’re like nothing we’ve ever seen, and hopefully the score stays true to this. Melodies come back throughout the show, each guiding us through the world of the loop. During recording sessions every 3 weeks, the natural sounds of the solo violin and the solo cello gave a beautiful, haunting sound to the loop, becoming an integral part of the sound.”

Glass added, “I’ve always tried to collaborate with people from many disparate perspectives; everyone from indigenous musicians to electronic musicians have expanded my musical sensibilities. Working with Paul was no exception and the intersection of our two styles has produced a score both unexpected and familiar that accompanies the series beautifully.”

ABOUT PHILIP GLASS
Born in Baltimore, Maryland, Philip Glass is a graduate of the University of Chicago and the Juilliard School. In the early 1960s, Glass spent two years of intensive study in Paris with Nadia Boulanger and, while there, earned money by transcribing Ravi Shankar’s Indian music into Western notation. By 1974, Glass had a number of innovative projects creating a large collection of new music for The Philip Glass Ensemble and for the Mabou Mines Theater Company. This period culminated in Music in Twelve Parts and the landmark opera Einstein on the Beach, for which he collaborated with Robert Wilson. Since Einstein, Glass has expanded his repertoire to include music for opera, dance, theater, chamber ensemble, orchestra and film. His scores have received Academy Award nominations (Kundun, The Hours, Notes on a Scandal) and a Golden Globe (The Truman Show). In the past few years several new works were unveiled including an opera on the death of Walt Disney, The Perfect American (co-commissioned by Teatro Real, Madrid and the English National Opera), a new touring production of Einstein, the publication of Glass’s memoir, Words Without Music, by Liveright Books, and the premiere of the revised version of Glass’ opera Appomattox, in collaboration with librettist Christopher Hampton, by the Washington National Opera in November 2015.

Glass celebrated his 80th birthday on January 31, 2017 with the world premiere of Symphony No. 11 at Carnegie Hall. His 80th birthday season featured programming around the globe, including the U.S. premieres of operas The Trial and The Perfect American, and world premieres of several new works, including Piano Concerto No. 3 and String Quartet No. 8.

In 2015, Glass received the U.S. National Medal of Arts and the 11th Glenn Gould Prize. Glass was honored with the Richard and Barbara Debs Composer’s Chair from Carnegie Hall for the 2017-2018 season. Glass received the 41st Kennedy Center Honors in 2018, and the GRAMMY Trustee’s Award in 2020.

ABOUT PAUL LEONARD-MORGAN
Paul Leonard-Morgan’s unique cinematic style of fusing orchestra with electronica has put him in high demand as a film composer, a producer and arranger for bands, and has led him to win a BAFTA award, and receive Emmy & Ivor Novello nominations.

Prior to working in film, Leonard-Morgan produced and arranged for acts including Belle and Sebastian, Snow Patrol, Mogwai, and No Doubt. However, it was his groundbreaking score for Relativity’s Limitless, a paranoia-fueled action thriller starring Bradley Cooper and Robert De Niro, that solidified him as a major player in the film music industry and was later nominated for the prestigious World Soundtrack “Discovery of the Year” Award in Ghent. His first Emmy nomination came in 2016 for the CBS TV spinoff of Limitless, helmed by Marc Webb (Spiderman, 500 Days of Summer).

Dredd, which topped the U.K. box office in its first week of its 2012 release, is widely recognized as launching a new generation of hybrid scores, causing Variety to note the impact of “the throbbing sounds of Paul Leonard-Morgan’s bass heavy score”. In 2016, Leonard-Morgan began working with Academy-Award winning director Errol Morris on a string of projects including the documentary feature The B-Side, the award-winning Netflix series Wormwood, and the newly-completed motion picture on Steve Bannon, American Dharma. Other credits include The Quiet One–the story of Rolling Stones founding member Bill Wyman, the feature Last Breath, the hit series reboot Dynasty for The CW, and Designated Survivor on Netflix, and the feature The Tomorrow Man which debuted at the 2019 Sundance Film Festival. Paul’s latest project is Amazon’s sci-fi series Tales from the Loop (co-scored with Philip Glass), which will be available for streaming on April 3rd. He is also one of three composers who are scoring the highly anticipated video game Cyberpunk 2077—an open-world action-adventure story developed by CD Projekt Red, which is slated to be released in September 2020.

He currently lives in Los Angeles, with studios in LA and Scotland.
Jeremy [Six Strings]
Hosted by Jeremy [Retro] at 11:15 AM

He did Minion music? Quite different from this series! The music fits it perfectly though.