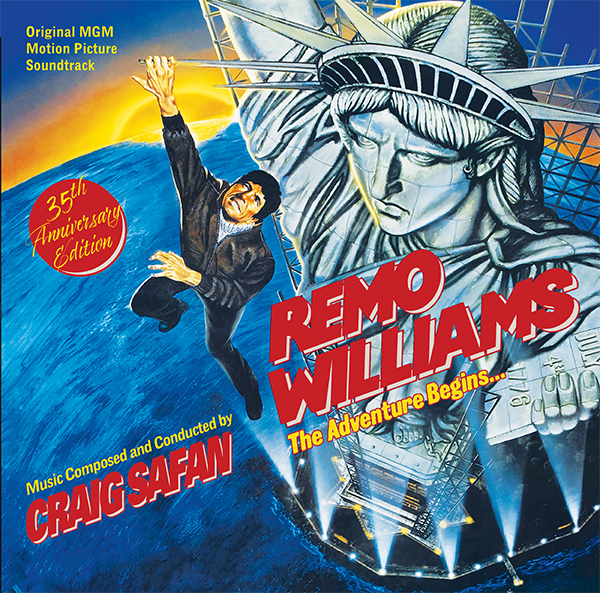 The character is based on The Destroyer pulp paperback series. The movie was the only adaptation featuring the character Remo Williams, and fared poorly in theaters. It received mixed reviews from critics, although it did earn Joel Grey a Golden Globe nomination. The film and a Remo Williams television pilot both credited Dick Clark as executive producer. The film was supposed to be the first of a series based on The Destroyer series of novels. A significant set-piece within the film takes place at the Statue of Liberty, which was surrounded by scaffolding for its restoration during this period.  Pre-orders now being accepted.  We expect CDs to arrive and ship the week of April 20.

Limited Edition of 600 CDs.  LIMITED TIME SPECIAL OFFER: With each purchase of Remo Williams you can add another CD or download release from our active titles at checkout to receive that item free (the system will recognize any currently available or pre-order CD or download automatically).  Buying 2 copies or more?  You can pick out other CDs or downloads to pair with each copy purchased.  While supplies last on each release and this offer will only apply to customers purchasing this release at retail price.  This is our thank you for three years of solid support from all the soundtrack fans, worldwide, who contribute to our success. (Note: If we run out of a specific title, we will reach out to you for a replacement to send out free).   [https://notefornotemusic.com]

With all the bad stuff happening in the world at the moment, something great comes from "Notefornote Music" and that is this score to one my favorite films. Composer Craig Safan brought his musical talents to this film, gave it life and today it has a fresh life. It's been released a few times, those were great releases by great labels... Notefornote Music gives a remastered edition that is clean, crisp and a worthy release.