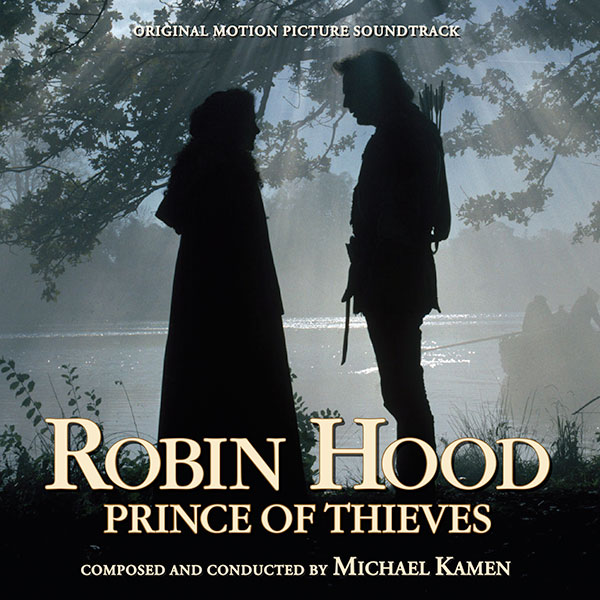 For Intrada's latest release, the label revisits its 2018 release of Michael Kamen's adventurous score for the 1991 Morgan Creek production of Robin Hood: Prince of Thieves. While the 2018 release featured a wealth of new material, it was still not complete due to available elements at the time. Now with the assistance of the Michael Kamen estate, not only were more extensive music elements available, they also boasted an improved sound. Among some of the cues being presented for the first time:

- "And His Merry Men" for the five-minute sequence when Robin and Azeem break out of prison and the introduction of Robin's father and the backstory of betrayal
- "Arrow," which launches with the rousing French horn and trumpet fanfare as Robin suddenly fires a crossbow at Sir Gisborne and the accompanying combat
- "Celt Battle" now includes the missing final part where Robin rescues Fanny and her infant from the burning tree house
- "Will Captured" is added to a 10-minute battle sequence, in which Will is spotted among the gathering crowds preparing to watch the hanging
- "Hangman's Drums"

- "End Credits," a cue Kamen wrote for the ending of the score, which was dropped in favor of the vocal (still not available for licensing for this release)

And more!
With the score proper filling two discs, the third disc includes a wealth of alternates. Included among the alternates is the Morgan Creek logo, which uses the Robin Hood theme for the logo attached to their movies from that point on. Finally, a fourth disc contains the entire program Kamen assembled for release on the first album (sans the vocal), as it contains many unique edits and assemblies making it a program worth preserving.

Joined by horns, Robin is given a heroic theme during the opening credits, drawing in the audience to the deeds and misdeeds to come from this new vision of Robin Hood. The orchestration is traditional—featuring brass in action scenes, strings in scenes of intense emotion, and pastoral woodwinds to evoke the beauty of Sherwood Forest. It roars, it whispers. It sings, it dances. It excites, it calms. Sometimes it even frightens. With a strong heroic theme, a "stalking bass line" for needed menace, and a simple, yet delicate and romantic love theme, Kamen composed a film score worthy of the mighty thief prince.

The film opens in Jerusalem, during a crusade led by King Richard I. Robin of Locksley (Kevin Costner) is a prisoner, escaping to return to England—but his homecoming is hardly joyous. The sheriff of Nottingham (Alan Rickman) has brutally murdered Lord Locksley, destroyed his estate and despoiled the countryside, hoping to amass enough wealth to bribe English barons to betray their lawful king. The events that follow mostly adhere to the established story and feature the usual ensemble: sheriff’s henchman Guy of Gisborne (Michael Wincott), Little John (Nick Brimble) and Friar Tuck (Michael McShane). But there are several new twists. Robin is accompanied back to England by a new character, Azeem (Morgan Freeman), a moor whose life he has saved, and who has vowed to return the favor. Maid Marian (Mary Elizabeth Mastrantonio) is a feisty, independent female who initially disdains Robin and manages to be an empowered woman until the very end, when she becomes a traditional damsel-in-distress.

No Bryan Adams? That's a relief.
Hope you're doing all right, Jeremy.