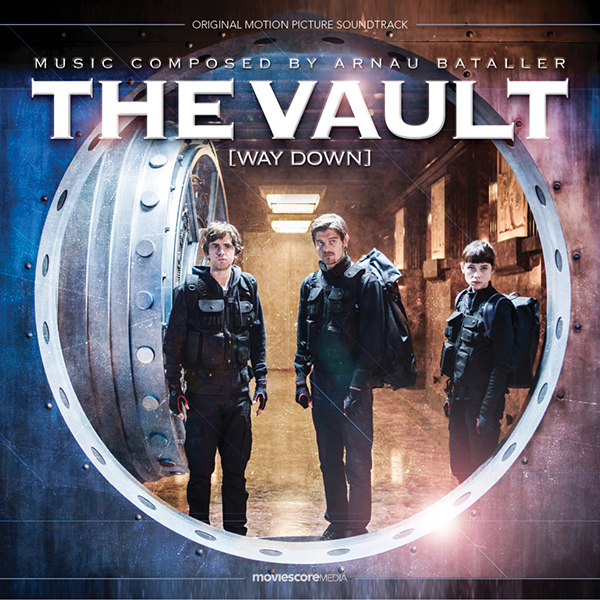 MovieScore Media’s latest release from Spain offers a curious blend of a heist movies and an inspirational sports story with Arnau Bataller’s intense action hybrid score for The Vault (also known as Way Down) capturing two exciting events at the same time. Directed by Jaume Balagueró, the film stars Freddie Highmore (Bates Motel) as ace engineer Thom Laybrick fascinated by the complexities of a vault in The Bank of Spain. When he learns of a legendary stored treasure kept there for ten days, Thom wants in and uses a window of 105 minutes to get in - the 2010 Football World Cup finals between Spain and The Netherlands which distracts the bank’s employees.
“The music of The Vault is the sum of many musical ingredients mixed to obtain a fresh, exciting cocktail that leaves a good taste in the mouth of the audience. We start putting the sound of the viola da gamba representing some historical elements, Then We add a few drops of "passion", the force that moves our protagonists represented by a theme played by strings. We continue with touches of thriller and action, planning the robbery, high-tech equipment, accompanied by lines of pulsing synthesizers, hang drums, guitars, and keyboards. And we finish by sprinkling some epic music for our protagonists, who face all sorts of problems while most people in Spain were celebrating a historical moment: the victory of the 2010 Soccer’s World Cup 2010. Agitate and Serve fresh.”
Arnau Bataller originally studied to play the violin and got a degree on the instrument in 1998 – then he decided to specialize in film music, studying the art form at the prestigious University of Southern California. Since graduating in 2002, Arnau has worked on countless American and Spanish projects. Some of his most notable works include José Luis Alemán’s H.P. Lovecraft-inspired horror films The Valdemar Legacy (2010) and The Valdemar Legacy II: The Forbidden Shadow (2010), the latter of which is available from MovieScore Media, while Screamworks Records has released the music for Julio Martí’s The Brotherhood (2014) as well as music from [REC]3: Genesis (2012) and [Rec]4 : Apocalipsis (2014).  [https://moviescoremedia.com/newsite/]
Jeremy [Six Strings]
Hosted by Jeremy [Retro] at 7:51 AM