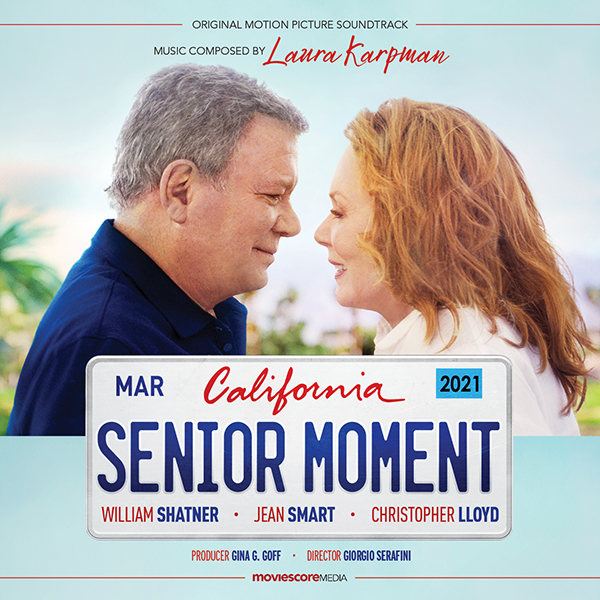 MovieScore Media's latest release is the courtesy of five-time Emmy winning composer Laura Karpman (Lovecraft Country, Taken), who provided a delightful caper comedy score to Giorgio Serafini's Senior Moment. Starring William Shatner, Christopher Lloyd and Jean Smart, the film follows the trials and tribulations of retired NASA pilot Victor Martin (Shatner) who has just been stripped of his driver's license. No he must must not only battle with the DMV, but he he is also forced to find new ways to navigate love and life without his beloved vintage Porsche.

“Senior Moment is a delightful film that is both a cool caper and a great love story,” explains Laura Karpman about what she loved the most about the project. “At its core, it is a film that, with humor and love, explores the dignity of aging. I had a blast with this project; bringing up my jazz chops, re-mixing & playing with source cues, and writing a love theme based on a Viennese waltz for a couple that was always meant to be!” The resulting score will sure to delight those fans who couldn't get enough of the caper sounds of David Holmes (the Ocean's 11 trilogy) or the entire heist genre with its strong jazz, soul and hip-hop influences.

As the first American woman composer inducted in the music branch of the Academy of Motion Pictures and Sciences, Laura Karpman has been a fierce champion for inclusion in Hollywood by founding the Alliance for Women Film Composers. Across concert halls, she is well-known for her Grammy award-winning album, Ask Your Mama, a multimedia opera based on the iconic cycle of poems by Langston Hughes. In terms of film music, her most recent credits include the HBO hit series Lovecraft Country, the Oscar-nominated documentary Walk Run Cha-Cha and the Discovery Channel docuseries Why We Hate, for which she won an Emmy Award in the category of Outstanding Music Composition for a Documentary Series or Special. While her previous Emmy winds were for documentaries Senior Moment proves that Karpman does wonderful work in romantic movies as well. [https://moviescoremedia.com/newsite/]