-Tell us about your career and what you are currently working on or involved with?
I am in a Cinemax television show called Femme Fatales.  My episode is episode 6 in the series, but for some reason DirectTV is under the impression I'm in all of them.... I am in talks about two features right now, and recently shot a PSA for the California Highway Patrol.

-Is this what you thought you would be doing with your life, what was your first passion?
I thought I'd be retired by now honestly, and I'm kind of bitter about it.

-To whom do you credit your success to, who gives or gave you the most support?
My parents have given me more support then I could ask for.  They've exhausted their savings, put me through college, and helped me out the entire way.  Luckily, they also instilled a sense of self discipline and drive in me.  No one can make it happen but me, but when I do I'm definitely fixing my parents house.

-If you could meet or work with [living or dead], who would that be and why?
I want to work with the Tim Burton/Johnny Depp/Helena Bohnam Carter team.  So weird, so strange.  So awesome.

-Who inspires you?
I have trouble with questions like these, because I attempt not to put people on a pedestal.  So many people do things that I find inspiring, but to pick one would probably make me feel bad about myself.

-How are things different today, than the same day 1 year ago?
Well, one year ago I was getting a lot more hate mail.  I lived in a slightly smaller place, and I was working more, but making no money.  I was less bored, and I didn't have to pretend I was more awesome than I actually am.

-What is the last song you bought or listened to in your musical device?
Counting Bodies Like Sheep To The Rhythm Of War Drums - A Perfect Circle

-Last good film you had seen, and the best movie you would recommend to someone asking?
I saw The Rite recently.  I really liked it.
I think everyone should see City Of God.  I realize it's in another language, and usually I can't handle subtitles, but it's so good I honestly forgot I was reading.  It's a beautiful, sad, happy, depressing and insightful movie..... I also realize I just described a documentary about giving birth, but it's not.

-What is the single greatest moment in your life?
I don't think I've had that moment yet, but when I do I'll let you know. 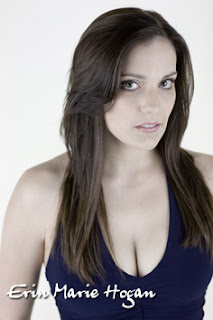 -Favorite Horror Film?
You know, it's hard for me to choose because I just like watching people being chased and/or killed.  It's much more interesting than people falling in love.  Requires more blocking.

-Favorite Book?
Harry Potter and the Goblet of Fire.  I'm a Potter Head.

-Favorite Thing In Your Home?
My dog, Tater Tot.

-Favorite First Pet?
Well I only had one first pet and I think it was my dads toy poodle Misty.

-Favorite Hiding Place [Not that we are looking]?
I like to hide in stairwells.  I feel like we have a lot in common.

-If you could tell someone something someone told you, "words to live by" what would that be?
I used to say "You can be anything you want to be if you just put your mind to it."  But then I got older and realized teaching mediocrity and making promises that can't be fulfilled should really stop, so now I just say: "No one hands your career to you on a silver platter.  You have to work, and you have to try.  Luckily, if you've chosen the right career, it won't feel like work."

Erin Marie Hogan
http://www.mafiadeerinmarie.com/
Hosted by Unknown at 9:18 AM

I'm glad I found your blog, which I found through Alex's movie blogfest. Anyway, it's very stylistic. Seems intriguing.