Star Trek As We Know It Blogfest...

Space... the Final Frontier. These are the voyages of the starship Enterprise. Its continuing mission: to explore strange new worlds, to seek out new life and new civilizations, to boldly go where no one has gone before...
Ellie at "http://elliegarratt.blogspot.com/" the huge fan of William Shatner and the series of television, films, books, toys, etc. Has come up with a brilliant blogfest bringing many of us together to share our favorite Trek moments. Without Star Trek how would we really know about space?  Here are mine counting from 5 to 1, cause I can:
--------------------------------------
--------------------------------------
05. Star Trek [2009] - This the only movie I wanted to see twice in the theater in a very long time, many thought it was a Trek sin. I felt it was a good re-telling of a television show that ran for two years and some change, it brought new life into something that will now live on into the next 40 years. 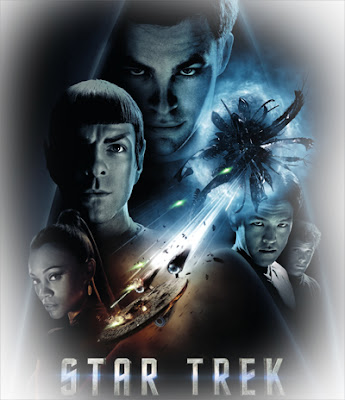 04. Star Trek Voyager - 7of9 Jeri Ryan, my heart goes pitty patter... she can assimilate me anytime. 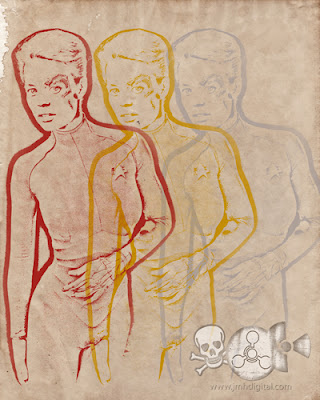 02. Star Trek Legend - Spock, Lenord Nimoy... if I have to tell you anything about this half-Vulcan/half-Human acept his full name and that is "S'chn T'gai Spock". 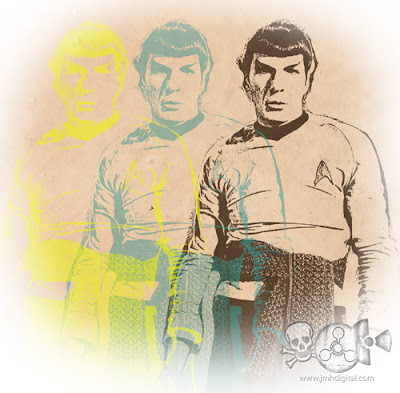 01. Star Trek: The Next Generation - All Good Things Pt 2 - Picard walks in on the last scene as the rest of the cast playing cards, he sits down to play and asks to play... They welcome him Picard looks around and says "I should have done this along time ago"... fade out. [I cried, you know you cried... let's rejoice and cry again]... 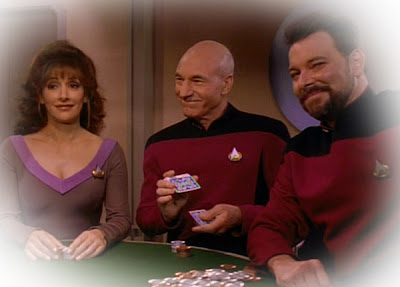 Awesome tribute. There are still some from Voyager I never watched, lost contact with that after the first season and only recently got the box set for that series.I too cried at the end of ST:TNG

Love the graphics!! Who thinks that the new Star Trek film is a sin!??! Awwwww it's brilliant and I for one can't wait for the next film! Hooorah!

Seven of Nine - she was amazing!

Gosh look at the rollcall of all the ST folk gone to the great NCC-1701-D in the sky. Take care
x

Oh yeah.... total depression when Next Generation ended. But hey, thats what reruns are for, right? :)
I agree the new Star Trek film was outstanding. I can't wait for the next one. I'm pretty critical on reduxs but I was impressed!!

I loved the new Star Trek film too and have also watched it more than once. I like the cartoon graphics you use. :O)

It's good to see your love extends so far around the Star Trek universe. I loved the bloopers, and the new Star Trek movie was awesome! :)

Good choices, Jeremy! Seven of Nine was so hot.

I didn't think the new Star Trek was a sin. The trailer was awesome and built and well-deserved buzz. Although I had some complaints with the film, it's on my top five list and I loved it. Saw it more than once also.

Yes! I forgot Scotty got to show up on TNG, too. Loved that episode.

Don't you love those bloopers? Classic ST was cutting edge for its day. Their technical people were approached by some guy who was working on the automatically opening door. He was disappointed when they told him they had someone on the other side tugging on something to get the door to open.

I was sad to see TNG go -- the best Trek, by far. But it couldn't have existed without the original series, and the new movie franchise pays tribute honorably.

You changed your blog! I love it!

Now I'm heterosexual but even I wouldn't mind being assimilated by Seven of Nine. LOL.

I loved the new movie as well. Of course, I saw it before I saw the old episodes (but I went back and watched them afterwords). And next generation is amazing-I'm still making my way through them (up to season 4 now) I can't even imagine how depressing it will be to see it end... nope, I'm not thinking about it. Nice post :)

I agree. J.J. Abrams saved the franchise with his reboot. What a great story.

The new movie was great! And I have not appreciated all the remakes and franchises that have spun off Star Trek. The bloopers were fun, thanks!

Love the bloopers! Great take on the Blogfest and love your artistic pics.

And you design book covers...hm. I must investigate further.

Yes, it was sad when TNG ended. Nice tribute to those who passed on. And, I agree on the newest Star Trek movie. It's the only one I've wanted to watch more than once in a very long time, too.

Aw! What a great tribute! Thank you for sharing this! :)

♥.•*¨Elizabeth¨*•.♥
Can Alex save Winter from the darkness that hunts her?
YA Paranormal Romance, Darkspell coming fall of 2011!

Great, great posts, and I love what you've done with the artwork. I do agree about the last film too : I really enjoyed it.

Great post! Thanks for the Bloopers video - my sister and I enjoyed it so much. I also loved the new movie. 7 of 9 was a favorite of mine.

I'm a huge fan of the original and the new movie too! The castings are so eerily familiar that it's perfect! :)

I cried too! Loved that series! Great choices all the way through :)

Reading about that last episode of Next Generation makes me want to watch the reruns. I never got into anything other than the original cast's films. Don't know why. Just never happened.
I did like the reboot in 2009 and will be curious to see what comes next.
Thanks.

Great list! Amazing how much goodness there is the Star Trek franchise.

My husband and daughter have made fun of me when Star Trek episodes make me cry... :) But, you just can invest in wonderful shows like this and not get attached!! The end of TNG was awesome...

Awesome tribute Jeremy. I love the bloopers - especially the ones showing Leonard Nimoy's sense of humor. His character is so perfectly matched to his real world personae you wouldn't think he has a sense of humor.

I enjoyed learning what you liked about Star Trek. I know how hard it was to narrow down to just a few.