-Tell us about your career and what you are currently working on or involved with?
I am an actress/film maker.  At the moment I am shooting a feature called "Teeth & Blood" where I play a bumbly rookie reporter, Crystal Forrester.  I am also in pre-production for a feature I wrote with my writing partner called "Hotel Arthritis," a comedy/horror all set in a retirement home.  We are scheduled to start shooting in late August, I play Kitty the activities directors, and am super excited to be working with Florence Henderson, Estelle Harris, and John Lehr.

-Is this what you thought you would be doing with your life, what was your first passion?
As a child I always wanted to be on camera.  I would host imaginary shows like 'National Clean Your Room Day' in my bedroom.  Although, I'm not as successful as I'd like to be quite yet, I'm pretty sure that creating worlds and acting them is the right path for me.

-To whom do you credit your success to, who gives or gave you the most support?
I would credit my recent success to my boyfriend/business partner Jason Lockhart, and also my Aunt Robin who has always been very supportive.

-If you could meet or work with [living or dead], who would that be and why?
I have always wanted to play Danny Devito's Daughter.  My father has a very strong resemblance to him, and I think Danny is super funny and talented.

-What would you like to be remembered for 100 years from now?
Hmm, I'm not really sure, I really wanna make a mark on the world.  I think I'd like to make movies that really make people think.  I'm a little dark and twisted, and have a thing for psychological thrillers.

-Who inspires you?
Andy Warhol has totally been a huge inspiration for me, along with Marilyn Monroe.  I also love being around people who are very positive and big into the law of attraction.

-How are things different today, than the same day 1 year ago?
Well, I guess the big difference is one year ago I thought of myself as more of just an actress.  But, today would call myself an Actress/Film Maker.  Also, my imdb has gotten significantly longer, shameless plug:  www.imdb.me/jacquiholland

-What is the last song you bought or listened to in your musical device?
Britney Spears, Dance Until The World Ends.  Luv that song!

-What is the single greatest moment in your life?
Hmmm, it's really hard to say.  The day I booked Desperate Housewives was pretty good.  Shooting My Best Friend's Girl was Kate Hudson was pretty awesome, and being chosen to read my Dare speech in front of my whole Middle school was pretty amazing.  But, I'd say it hasn't happened yet. 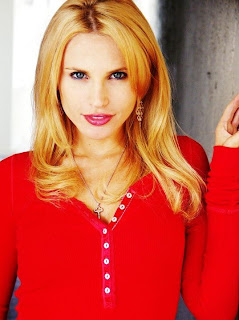 -Favorite Book?
"Many Masters, Many Lives" by Brian Weiss

-Favorite Phrase?
Believe in the Universe

-Favorite Hiding Place [Not that we are looking]?
Love to mediate in the closet.


http://jacquiholland.com/
Hosted by Unknown at 4:53 PM

I am loving these features. Magnificent women and unlike anything I read daily. Keep it up my friend. Glad I could enjoy this today.