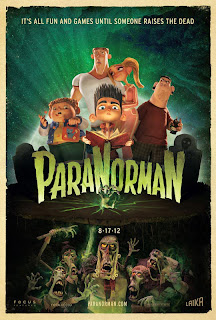 Don't worry, folks. The dead bodies talk so that makes it okay.

PARANORMAN brings a slightly darker edge to children's mainstream animation. In no way is it as dark as kid's movies back in the eighties. Remember those? Remember the NEVERENDING STORY when that large werewolf would run around with it's huge teeth and damnable nightmarish yellow eyes? The horrible thing talked too. Or what about THE DARK CRYSTAL with the giant black crabs that broke through walls from everywhere dispelling any notion that you were going to get a decent night sleep. SECRET OF NIMH, anyone? Back in my day kids movies gave you nightmares and that's they way we liked them. They were a little more adult filled with imagination that wasn't afraid to get a little dark from time to time. Nowadays we get some good animated films (Usually from PIXAR) but they are all free of any imagery that would freak out the wussiest of brats. PARANORMAN comes close to bringing back some of those kinds of disturbing moments but not quite. It is a good movie but not great. Why do they always have to put some boring moral lesson into these movies? Why do they always have to go the "smart" story route. Why can't this be a simple story about a boy who fights zombies and becomes a hero because of his extreme knowledge of horror movies and his macabre ability to communicate with the dead? Oh, well at least it is not a musical.

PARANORMAN starts off great with our protagonist Norman watching a zombie movie on t.v. We see that he is totally obsessed with zombies having posters of them all over his wall with a zombie alarm clock and a zombie tooth brush and such. His family thinks he is weird because he still talks to grandma who has been dead for a few months or so. As he goes to school he talks to all the ghosts that he sees along the way. The town folk see him as weird too. At school he is bullied and treated like an outcast but he befriends the fat kid and blah-blah-blah zombie stuff happens. We know all this stuff already. What about the zombies? Well for one they are risen from the dead by a witches curse. We find out that they were (sigh) Puritans. There were seven of them that stood witness at the witch's trial. Now right there we already know that they unjustifiably sentenced some poor girl to death for witchcraft because that is what the Puritans did back in the old days. At least according to the History Channel they did. How uncreative is that? Puritans and witches curses? How about a leaky barrel of toxic waste rolling through a cemetery and some Butt-Rock Hair Metal music to get our zombie carnage started? I miss you, the eighties. *Sob*

"At least it's not a musical" - hilarious!

I liked Paranorman. It had the courage to feature a gay character.

I liked Paranorman.Amazing this post is helpful Thank you
Cheap iPods