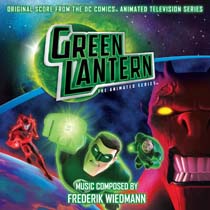 
La-La Land Records and WB Animation presents the original soundtrack to the hit DC Animated Television Series, GREEN LANTERN: THE ANIMATED SERIES, currently airing on Cartoon Network. Composer Frederick Wiedmann fashions an action-packed score that propels the Green Lantern to new heights and perfectly enhances all the acclaimed show's superheroic thrills! Packed with more than 70 minutes of original music from some of the show's greatest first season moments, this is a must have for animation fans everywhere! Produced by Frederik Widemann and MV Gerhard and mastered by James Nelson, this thrilling compilation CD includes liner notes featuring comments from the composer and the show's producer, Giancarlo Volpe.
So good friend to the Howlin' Wolf is composer Frederik Wiedmann who never seems to stop amazing us with his talent and his ability to switch musical gears from horror, drama and now animated. From the samples I have heard, this is definitely one I want to get and I think autographed copies are still available.
-Jeremy [Retro-Zombie]
-------------------
Hosted by Unknown at 2:02 AM