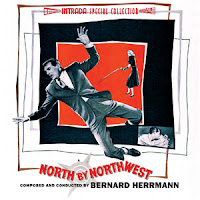 
At long last! Oft-recorded Bernard Herrmann masterpiece finally gets complete release in dynamic stereo from new masters! Previous release on Rhino label was spectacular album, albeit several major set pieces (including main title & climactic Mount Rushmore sequence) were transferred from damaged elements, all that was then available. Thanks to Warner Bros., new stereo mixes have been made available for first time ever, revealing spectacular sonics (for 1959) and illuminating new details of magnificent score never before captured. While score has also been digitally re-recorded twice under different conductors, neither version can match crisp, exciting performance of MGM Studio musicians under baton of Herrmann himself. Hear harp arpeggios, castenets, wood blocks, snare drums like never before. Get entire climax with punch of bass trombone, thrilling trumpets amidst swirling variety of tempos that keep tension, excitement of Hitchcock's incredible action set-piece moving at fierce pace. Alfred Hitchcock's brilliant film stars Cary Grant, Eva Marie Saint, James Mason, young Martin Landau and is regarded as one of director's greatest achievements. Crop-dusting scene, Mount Rushmore climax are movie icons. Romance between Grant, Saint is heartfelt, all the more so with Herrmann's tender love theme for strings. Composer is also major part of excitement, suspense of wild tale. Under loving guidance of Neil Bulk & Lukas Kendall, Herrmann's score comes home at last not only with best sound possible but also with first-ever reproduction of original MGM artwork campaign, color stills, informative notes by Frank De Wald, complete cue assembly details plus musician's list. The final word on North By Northwest! Bernard Herrmann conducts. Intrada Special Collection release available while quantities and interest remains.
5/5 I am not telling you anything other than, if you love this film... you will love this score. Finally a worthy release to a masterpiece, not that the other releases were not good, just not great!
-Jeremy [Retro-Zombie]
Hosted by Unknown at 12:02 AM

It's been a while since I've seen the movie but I'll take your word for it!