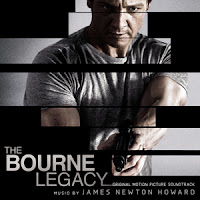 
The narrative architect behind the Bourne film series, Tony Gilroy, takes the helm in the next chapter of the hugely popular espionage franchise that has earned almost $1 billion at the global box office: The Bourne Legacy. The writer/director expands the Bourne universe created by Robert Ludlum with an original story that introduces us to a new hero (Jeremy Renner) whose life-or-death stakes have been triggered by the events of the first three films.

Composer James Newton Howard follows in John Powell’s footsteps, taking on the Bourne franchise for this next film chapter evolution of Ludlum’s blockbuster saga.
4/5 I like it, I just feel the movie might effect the success of the score, James Newton Howard always produces the great pieces. I have not seen the film, but I am just stuck that it is another direction I don't choose to follow. So what I guess I am saying is I am a fan of the score, not the film... not yet at least.
-Jeremy [Retro-Zombie]
Hosted by Unknown at 12:02 AM

I haven't seen it yet. We're cheap - always wait for the DVD unless it's LOTR, which I believe is the last movie I saw in a theater...no wait, Harry Potter 6. Twice. Sigh. My memory...I do miss it.
Actually never paid attention to the music in any of these...too busy watching hubba hubba Matt Damon...
Tina @ Life is Good