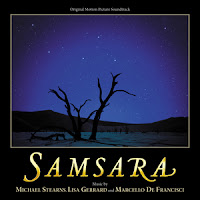 SAMSARA reunites director Ron Fricke and producer Mark Magidson, whose award winning films BARAKA and CHRONOS were acclaimed for combining visual and musical artistry.  SAMSARA is a Sanskrit word that means “the ever turning wheel of life” and is the point of departure for the filmmakers as they search for the elusive current of interconnection that runs through our lives.  Filmed over a period of almost five years and in 25 countries, SAMSARA transports the viewer to sacred grounds, disaster zones, industrial sites, and natural wonders.  By dispensing with dialogue and descriptive text, SAMSARA subverts our expectations of a traditional documentary, instead encouraging our own inner interpretations inspired by images and music that infuses the ancient with the modern.

Michael Stearns is a highly accomplished composer, musician, and sound engineer who combines a diverse range of skills to create music with a deeply resonant and spacious quality very conducive to work with film. He has created music used for James Cameron’s The Abyss, Titanic and Avatar, Disney Films, HBO, ABC, PBS, BBC, Discovery Channel, and the non-verbal films Chronos, Sacred Site and Baraka.

Lisa Gerrard has established herself as one of Australia’s most groundbreaking and in-demand artists. Over a career that takes in almost two decades with the group Dead Can Dance, as well as a number of award-winning movie soundtracks, including the Golden Globe Award-winning score for Gladiator, with Hans Zimmer, and a series of acclaimed solo and collaborative albums.
Dead Can Dance are currently recording a new album and will embark on an extensive world tour starring in August.

Marcello De Francisci is a composer who has provided award-winning music for various films, television shows, and video games since the late 90s. Lisa Gerrard and Marcello De Francisci have collaborated on six consecutive films and an album titled Departum.
5/5 Well mix of styles brought together in one place, talented joining if you will. I am pleased with this score each composer brings their own and that is a treat for our ears.
-Jeremy [Retro-Zombie]
Hosted by Unknown at 12:02 AM