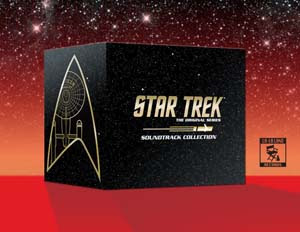 The collection is expected to be released in late fall 2012. It will be a limited pressing, but the total number of units to be manufactured has yet to be determined. You can help the label decide how many units will ultimately be pressed by visiting www.lalalandrecords.com now and signing up for the STAR TREK: THE ORIGINAL SERIES SOUNDTRACK COLLECTION MAILING LIST.

OH MY GOODNESS GRACIOUS ME... YES PLEASE!
-Jeremy [Retro-Zombie]
Hosted by Unknown at 12:02 AM