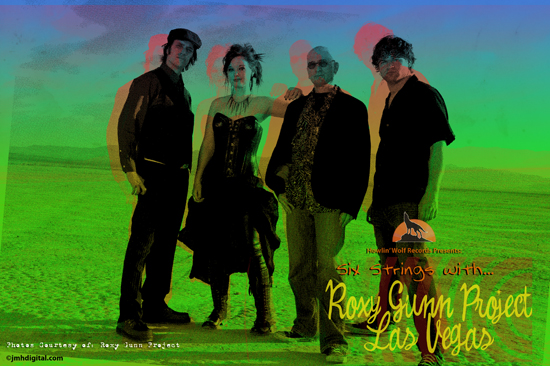 Okay there is a film coming out called "ROAD TO HELL" which is going to be a sort of sequel to the eighties film "STREETS OF FIRE" and director "ALBERT PYUN" friend of the "HOWLIN' WOLF RECORDS" let us know about this film. That leads me to this great group that was in the film, then I was taken back by this talent known as "THE ROXY GUNN PROJECT". So I am glad to be able to have had the oppurtunity to chat with them all, so enjoy...

I wanted to thank them and Joze Perez for all the cool stuff...
-Jeremy [Retro-Zombie]


- What is your involvement with the film "Road to Hell", how much of this reflects as a sequel to "Streets of Fire"?

ROXY GUNN: I contributed some original music to the soundtrack of Road to Hell. I also play the role of Cody and Ellen's love child, Ellen Dream. I think this definitely reflects Streets of Fire considering the 'encounter' that Ellen and Cody had toward the end of the movie. It sort of picks up where Streets of Fire left off. Just 20 years later.

CHRIS REJECT: "I’m the bassist of the Roxy Gunn Project and I'm also the voice of D.J. DANTE in the film"

RYAN J: I pretty much play myself but as part of the band Ellen & The Blasters.

- Introduce yourselves, please share something about yourself that is not in your bio [you feel comfortable sharing] and your part of "Roxy Gunn Project"?

ROXY GUNN: My name is Roxy Gunn and I play guitar and sing for the Roxy Gunn Project. I'm afraid of frogs.

CHRIS REJECT: "I am The Reverend Chris Reject. I’m an Aries. I like long walks on the beach and margaritas bigger than my head. Some things people may not know about me.
1. I am a Marxist (NOT A COMMUNIST!!!! there is a big difference and I wish people would understand that), 2. I was once an established actor and was awarded "Best Thespian" in 2001 for Nevada Thespian Conference, 3. I have a degree in Political science in secondary education. and 4. I can play Saxophone.

JON MILLS: I am Jon Mills, the Lead Guitarist of the Roxy Gunn Project.  Something not in my bio?  Even now the majority of my time spent is playing guitar whether it’s learning new songs, practicing new techniques, or just working on playing at the speed of light.. Hah.  It’s really the biggest part of my life, and I love every second of it!

- Being on set to "Road to Hell" what are some of the good and bad things you were part of, what were some of your experiences?

ROXY GUNN: I can't think of any bad experiences during this project. It's all been great. The only thing that has been hard is waiting! Trying to have patience and waiting for this movie to be released has been quite a challenge. Working with everyone was incredible though. I never thought I would have the opportunity to work with such a talented group of people.

CHRIS REJECT: "The good experiences were that Albert and crew were open to suggestions and helped us be as comfortable as possible. Being a musician in real life and trying to portray the hard work musicians go through is tough to catch on film. The only bad thing was that, I’m highly allergic to mushrooms and everything that was served for lunch had mushrooms. Not anyone’s fault though. I didn’t say anything. I just ate salad."

JON MILLS: It was an amazing experience all around.  It was my first time being on a real movie set and what I was anticipating was not reality at all.  The whole crew was awesome, everyone was friendly, and it was definitely one of the most fun experiences of my life.  It gave me a whole different perspective into the world of cinema.

RYAN J: Being in Road To Hell has been an amazing experience. Working with such talented people, both cast and crew was at an unmatched level of professionalism. I can’t say that anything was bad, but the most challenging thing about it was being on set for 12 hours and playing for most of it. I’ve played long 4 hour shows but never this long in one day.

- How did you get involved with this project as a group?

ROXY GUNN: Chad Clinton Freeman, who is a great supporter of ours met Albert Pyun at a film festival and the topic of RTH came about and the story goes, Albert needed a female-fronted rock band and we were the first group that came to Chad's mind. The rest, as they say, is history.

CHRIS REJECT: "I was told we were filming a movie".

JON MILLS: I met them at Hogwarts.  Really though, it’s a cool story.  I was poking around on Facebook when I found this awesome Redhead chick holding a guitar… So naturally I clicked add.  Later on, after some short conversations, we found some common musical interests, and I was invited to check out her band at a little place called Downtown Vintage Guitars.  I went and saw them, and did a little demo of my “skills” right on the spot.  I was sent the list of her original songs and learned two of them that night, and showed up at their gig the following night with my guitar and… The rest is history!

RYAN J: Director Albert Pyun contacted me after seeing us play at the Pollygrind Indie Film Festival and said he had been looking for a band with a red headed female singer. I was reluctant to email back for a few days as I have heard all kinds of crazy stories before. I finally decided after a few days to look up this Albert Pyun guy on Google and IMDB. Let’s just say I couldn’t reply to his email fast enough. He then called me about 5 minutes after I wrote back. We met a few times and then we were thrown into a whole new amazing world that none of us ever imagined.

- Musically who do you find yourselves listening to?

ROXY GUNN: Everything. Rush, Motley Crue, Frank Sinatra, Johnny Cash, Ramones, Eminem, Dave Matthews Band, etc. I have so many influences it's ridiculous. I have over 3,000 songs in my iTunes. We should talk about that in another interview.

CHRIS REJECT: I can go on for days. I have a very wide range of styles I listen to. I’m the old school punker in the band. So here’s my top bands: 1. Barenaked Ladies, 2. Alkaline Trio, 3. Ramones, 4. Mates of State, 5. Captain Geech and the Shrimp Shack Shooters, 6. Mad Caddies, 7. Mighty Mighty Bosstones
8. Grocery Store Rejects, 9. TSOL, 10. Phenomanauts

JON MILLS: I listen to quite a bit of old school music.  I’m a snob really.  I love the classic rock and metal from the late 60’s to the early 90’s, and most of the stuff in-between.  I also have a deep love for progressive rock and metal.  Rush, Dream Theater, Van Halen, Led Zeppelin, Metallica, Def Leppard… Just some examples!

RYAN J: I listen to hundreds of bands from different genres. It’s really hard to just list them. There is so much great music out there. I do find myself listening to lots of Rush, 311, and Avenged Sevenfold just to name a few.

- Where would you like to see yourselves in one year as a group?

ROXY GUNN: Touring the world and spreading our music in every corner of the globe. We're all about playing for anyone who will listen and even those who won't. As long as I can play music with these guys, I'm happy.

CHRIS REJECT: "anywhere but my garage. Actually I want us to be on the road. Europe, Asia, Canada....anywhere. Just as long the is an instrument in my hands and people listening to the magic that we create."

JON MILLS: I would love to see ourselves on tour, going around the world, playing music for everyone and anyone!

RYAN J: I hope that we will be touring the world with some amazing bands and playing incredible venues and cities.

The Roxy Gunn Project is an eclectic, energetic rock band from Las Vegas, Nevada that is fronted by the soulful, warm voice of Roxy Gunn and backed up by a driving, edgy hard rock guitar sound. The Project’s goal is to share their music with as many people as possible and gain a solid world-wide fan base; show by show, song by song. Roxy Gunn Project songs deliver thoughtful, yet sassy lyrics and emotion-wrenching lead guitar work that can only be described as a rebirth of rock and roll in its purest form.

The Roxy Gunn Project is rapidly acquiring fans locally and globally as they perform for the many natives and tourists that visit the Las Vegas area and keep in touch with the band through their website, roxygunnproject.com, and through popular online social media outlets such as Facebook, YouTube, Twitter, Reverb Nation, Google + and Pinterest.

Great interview Jeremy. What a cool bunch of cats. It's obvious their love of music translates into their songs.

Cool they do the music AND they are in the movie. Sequel to Streets of Fire. Young people will have no idea what that is!

i am enjoying this group... and add a sort of a sequel to one of my favorites film...