THE PROPHECY: THE COMPLETE COLLECTION [BLU-RAY] 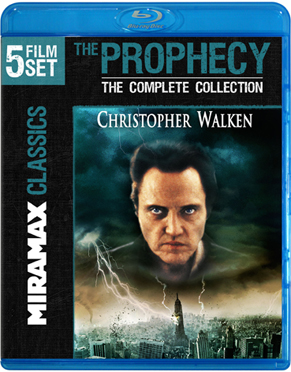 Synopsis:
THE PROPHECY
A detective and an elementary school teacher (Virginia Madsen) try to stop the angel Gabriel (Christopher Walken) and his forces of evil.

THE PROPHECY II
With the help of a mysterious stranger, an innocent woman (Jennifer Beals) races to protect her child from the powers of evil and save all humanity.

THE PROPHECY 3: THE ASCENT
The only one with the ability to stop the bloodshed between armies of rebel angels is Danyael, who was born of an angel and a woman.

THE PROPHECY: UPRISING
When an ancient religious manuscript lands in the hands of an unsuspecting young woman, she is suddenly thrust into the center of an epic battle between ruthless fallen angels.

THE PROPHECY: FORSAKEN
Fighting for control of the Lexicon—an ancient religious text that reveals the arrival of the Antichrist—a group of fallen angels will stop at nothing to capture it and its possessor (Kari Wuhrer).

Echo Bridge Entertainment
https://www.echobridgeentertainment.com/
5/5 I have always enjoyed these films, the first three are connected as part of a trilolgy and then the last two are connected. What I like and dislike is one they are finally on BLU-RAY and that is great... no features really, just the films. Bad is that the films 1, 3, 4 and 5 are on one blu-ray... the 2nd is on it's own... weird, but okay.
-Jeremy [Retro-Zombie]
Hosted by Unknown at 12:30 AM

I have not seen all of these, only the first three. I'll have to check out the other two.