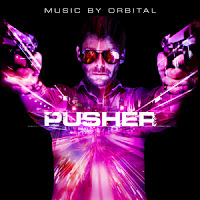 The film follows a story of luckless drug dealer Frank over a course of a bad week.

“Working on Pusher was a great opportunity to create a score that draws on both moody thriller styles and dance music in equal measures. Full of anthemic film noir moments. Brilliant.”
- Paul Hartnoll (Orbital)

In 1997, the British electronic dance music duo Orbital contributed to the scores of two feature films, Event Horizon and The Saint, and the music they made was amongst the more powerful and interesting elements in either movie.

In April, Orbital released Wonky to critical acclaim - their first album in eight years. BBC Online described the Wonky as “a triumphantly grand return,” NME as “a deep pool of blissful, sedentary festival listening”, whilst Q placed Orbital amongst “electronica’s music’s greats”.
5/5 This score is very cool and I am glad it came to the table, it has it's groove and style... then takes dips into a murky pond.
-Jeremy [Retro-Zombie]
Hosted by Unknown at 11:49 AM