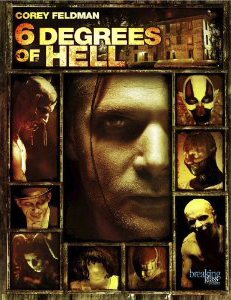 
Plot: In Northeast Pennsylvania, “Uncle Jack’s Hotel of Horror” is besieged by a dark presence after two friends of "Uncle" Jack, Chris and Kellen, unwittingly release a deadly evil by transporting local psychic Mary Wilkins' collection of haunted objects as props for the popular tourist attraction. At the same time, a local TV ghost hunter confronts an evil that has haunted him all his life — one he believes is responsible for his sister’s death years ago.

His search puts him in the path of a rogue police chief and June—a girl who seems to be the eye of this supernatural perfect storm. They all find themselves connected to the old hotel while the threads of their own personal horrors draw paranormal investigator Kyle Brenner (Corey Feldman, The Lost Boys, The Goonies) to pull all the threads together.
3/5 I don't know what the heck was going on, it's just weird... what drew me to this film was the cool cover and of course Corey Feldman. What I got was a who is that guy and where did she come from, I am going and why in this place... to have to watch it again. I found of five of those degrees and the sixth was this movie.
-Jeremy [Retro-Zombie]

and then people wonder why we're afraid of clowns....