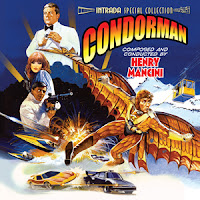 5/5 Jealous... this was one of my favorite films back in 1981, from the trailer to the film... I don't remember the score, I do know that I loved it. Also that crazy guy Michael Crawford was the lead, he went off to do so many great things. This is another out of this world release from the ever popular Intrada label... it's limited so what are you waiting for?
-Jeremy [Retro-Zombie]
Hosted by Unknown at 12:00 AM

I remember that movie, but mainly from the novelization. The scene when the car breaks out of the truck is my favorite. Mancini did some amazing film scores.