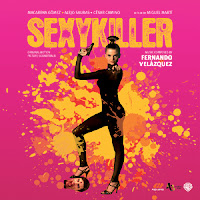 
The acclaimed score for The Orphanage won Spanish composer Fernando Velázquez a lot of fans around the world, and his current score for Orphanage director J. A. Bayona’s The Impossible has even more established the composer as one of the most talented film composers of his generation. MovieScore Media has released two of his previous scores, the large orchestral score for Shiver and the chamber jazz score for Garbo: The Spy.
We are now proud to – after more than four years of preparations – present the world premiere recording of his score for Sexykiller, the Spanish horror action comedy from 2008 on our Screamworks label. Without any doubt, this is Velázquez’s most entertaining score to date, featuring his trademark big orchestral voice in conjunction with some surprising stylistic elements, heard specifically in the opening track. Reflecting the hilarious genre mix of the movie, the score features a lot of action writing, über-romantic love themes and spine-chilling horror orchestrations.
5/5 No words... other than it just rocks and then some!
-Jeremy [Retro-Zombie]
Hosted by Unknown at 1:00 AM