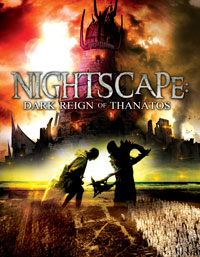 
In Nightscape: Dark Reign of Thanatos, the ultimate struggle between man and the Gods takes place. Upon creating the earth the great god Zelos grew weary and so forged in his image two sons to uphold his kingdom and ensure its longevity, Aevum and Thanatos. As time progressed, so did the intentions of the two sons. The second, Thanatos poisoned himself against the will of his brother and turned to blackness and evil for answers. From this new hatred, the darkness bore a final battle to end the rule of either son- for their father lay dormant, undisturbed and unaware of his failing hopes.

Years later, Thanatos threatens the very existence of our world, but something is still preventing him from total domination as the future of all humanity lies in the balance.

Reality Is What You Make It
www.reality-entertainment.com

4/5 Another one that peaked my interest, it was a little continuous... but there was a lot well put graphics and story in it... I know another one.
-Jeremy [Retro-Zombie]