CHILDREN OF THE CORN / HALLOWEEN COLLECTION 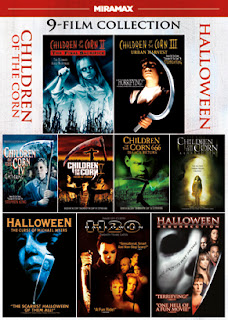 HALLOWEEN: THE CURSE OF MICHAEL MYERS - Six years after he was presumed dead in a fire, Michael Myers has returned to kill again—and this time there's no escape. HALLOWEEN: H2O - Laurie Strode is still struggling with the horrifying memories of Michael Myers when he suddenly reappears with a vengeance. HALLOWEEN: RESURRECTION - Reality TV programmers select a group of thrill-seeking teenagers to spend one night in the childhood home of serial killer Michael Myers.

5/5 A little late than never I say... so I held off for the whole winter coming, when you watch this you won't worry about the children in the corn. Love these movies... that is it, you get all but the first corn movie... and the last three Halloween films...
-Jeremy [Retro-Zombie]
Hosted by Unknown at 12:00 AM