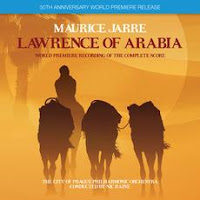 Widely considered one of the most influential films in film history this album features, for the first time, the complete 77-Minute Score performed by the acclaimed and award-winning City of Prague Philharmonic Orchestra, conducted by Nic Raine. The album was recorded from the original 1962 orchestrations by Gerard Schurmann.
5/5 Well done... well done version, fan of this film... you will be a fan of this score!
-Jeremy [Retro-Zombie]

an amazing soundtrack, and you know I always love them epic!