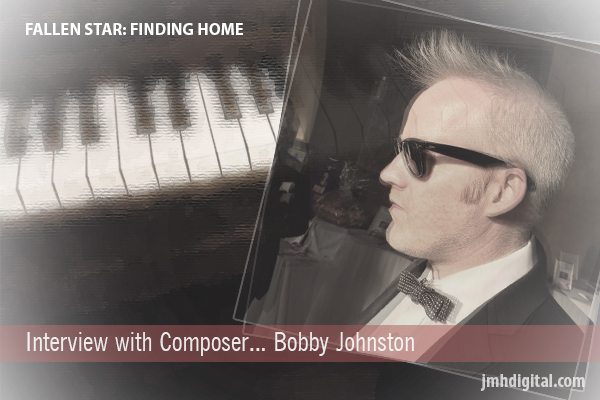 Jeremy [Six Strings]: How did you find the musical direction for this documentary, was it your choice or the director/producers?

Bobby Johnston: The musical direction of the score was sparked by conversations with the directors; Valerie Stadler and Vera-Brunner Sung. They were interested in a string based score, with a modern sort of sensibility. The score needed to reflect Do Ho Suh’s inspiration for creating the Fallen Star installation, as well as it’s planning and execution. The music also had to convey the skewed perspectives and off-kilter sensation that comes from experiencing the installation. The documentary was beautifully shot and directed, so there was plenty of visual inspiration for the score.

Jeremy [Six Strings]: What were some of the cool things, while being involved with this project... maybe share a story?

Bobby Johnston: One of the fun things on this score was searching for the right elements to accent the string parts. I used a bit of prepared piano on a couple tracks, which I find interesting to blend with strings. I also had fun with the double-bass, in both bowing techniques and using the body of the bass as a percussive instrument.

I was lucky to have cellist John Krovoza living nearby and he’d played on a number of my scores before Fallen Star, so having both his talent and accessibility for this score was a big advantage. We clocked in dozens of sessions and he was able to pop over for quick takes when I was still deep in the scoring process (he played viola on the score too).

I was also fortunate to work with Billy Malpede (William V. Malpede) on this project. Billy did additional orchestrations and co-writing with me on the score, as well as performing keyboards. We’ve worked together on a few of my scores since Fallen Star and it’s always wonderful because we have such complementary skill sets. Billy really understands my writing and instrumental shenanigans, so it’s been great to help stretch my sound.

Jeremy [Six Strings]: What's next, can you share any updates on upcoming projects?

Bobby Johnston: I recently finished scoring the HBO documentary “Bleed Out”, which was directed by Steve Burrows and premieres December 17th on HBO. The soundtrack will also be released by Milan Records.

About: Bobby Johnston
Composer/multi-instrumentalist Bobby Johnston’s credits include scores for directors Charlie Kaufman, Larry Clark and Stuart Gordon. His approach to composing utilizes organic and acoustic instruments, which he plays himself, often complemented by featured soloists.

Johnston has composed original scores for several films, including Wristcutters: A Love Story, Edmond, Stuck, Mother’s Day, Marfa Girl, City of Gold and Bleed Out (HBO). His music has been heard extensively on the radio program This American Life and has been included on two of the show’s greatest hits CDs.