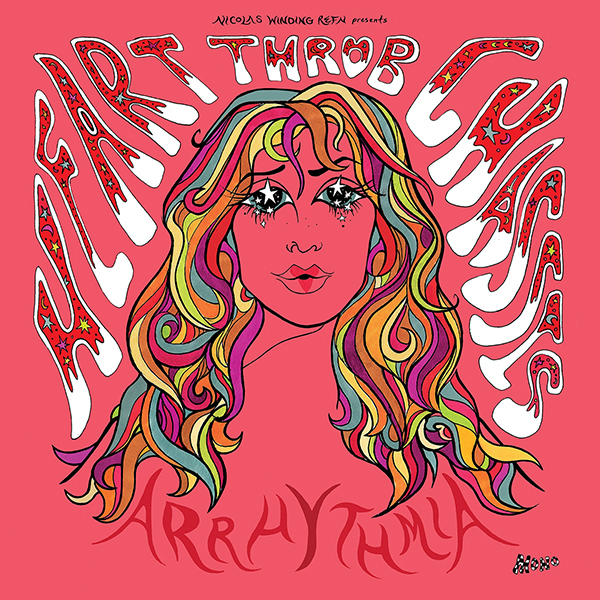 Arrhythmia is the latest release from Heartthrob Chassis, the Detroit-based glam garage rock band headed by Margaret Dollrod, former songwriter and member of the sensational Demolition Doll Rods. It's out September 21st on Milan Records as a part of the Nicolas Winding Refn Presents series.

In a previous lifetime Margaret was the driving force behind the Demolition Doll Rods, a legendary three-piece whose primal, primitive sound—not to mention sartorial splendor (or lack thereof: hubcap brassieres, anyone?)—was beloved not only by a legion of rabid fans, it kick-started a garage-rock revival, inspiring countless bands, among them the White Stripes. The Doll Rods toured with the Cramps, Iggy Pop, Andre Williams, and Jon Spencer’s Blues Explosion (Spencer coproduced the Doll Rods’ classic debut album Tasty), and counted among their admirers such underground legends as Sky Saxon and Hasil Adkins.

After touring various countries solo like a gypsy the past few years, Margaret has returned to that sound she does best—two guitars and drums, all dressed up with that special cherry on top, Marge's deep, sexy man-voice. Heartthrob Chassis is the name of this outfit. On guitar we have the dashing, debonair Ben Van Camp. "He's not just an Angel, he's an Earth Friend that can play all the instruments," explains Margaret. Pounding the skins is Kate Gowman. Says Marge, "When a beautifully sweet Long-Legged Creature looks you in the Eye and says 'We could play together,' you just might want to give it a try!"

Margaret led her band by the hand, deep down into the plush, pulsating recesses of her Detroit basement to make a record. The result is called Arrhythmia, and it's a doozy. How does Margaret describe this hot new sound?  "The fortunate finds of this Life Divine has let music do her thing. Vibrating and pulsing through a Melodic Mayhem, where anthems and curiosity breath deeply and heavily into the tones of Fun...directly into the Madness of the Dream."

It is perhaps fate that the Danish outlaw himself, director Nicolas Winding Refn (Drive, The Neon Demon, Only God Forgives), has been enchanted with the work of Margaret Dollrod since her time with Demolition Doll Rods. A longtime student of underground counterculture, Refn has thrown his full weight behind the release of Arrhythmia, and will be pushing the album in conjunction with the release of byNWR, a streaming and culture platform curated by Refn. The filmmaker was so knocked out by Margaret's life story he decided to let her tell it herself in an epic story on his website—and he not only had Heartthrob Chassis filmed performing a set in her basement for the site (in 3D, no less), he had to bring you their first album personally. byNWR will feature Arrhythmia and articles by and about Margaret Dollrod heavily in the run-up to the album’s release in September.

"The songs just come, I don’t feel like I even write them," Margaret describes. "You know how an amplifier will pick up a radio station? I’m like that...to be certified for sharing, a song has gotta go through certain checkpoints inside my soul. There’s these basic instincts we have and my music is from there.  It’s very primitive and very raw."

Who inspires Margaret?  "Tina Turner, especially her thighs—and yes, Ike's fingers (while on guitar), Josephine Baker, Jimi Hendrix, Isadora Duncan, Parliament/Funkadelic and those that ride the Mothership, Ron Asheton, Guy Peellaert, Mohammad Ali, James Brown, Peter Pan and everyone on Hee Haw and Laugh-In." But inspiration is different from influence--as far as music goes,  "I must be very honest--most of these people I've named came to me after I started playing." As always, Margaret just figured it out herself. She's a Grandma Moses in go-go boots, a Van Gogh wrapped in visqueen. Margaret has gone her own way and done her own thing since the very beginning.

The vinyl LP features a beautiful hand-painted layout, credit insert, and is pressed on white vinyl.


Born from NICOLAS WINDING REFN’S passion for the rare, the strange, and the crazed, byNWR.com is an ever-expanding world of original creative content, all of which is free. Carefully curated by a special guest editor specifically chosen by Refn, our quarterly volumes are divided into three monthly chapters, each featuring a meticulously restored film. The movie itself is just a touchstone, however, a talisman used to inspire a wealth of personally created new material, whether it be articles, biographies, essays, or original music, video and photography, all of it accompanied by a wealth of previously unseen cultural artifacts connected to the film itself.