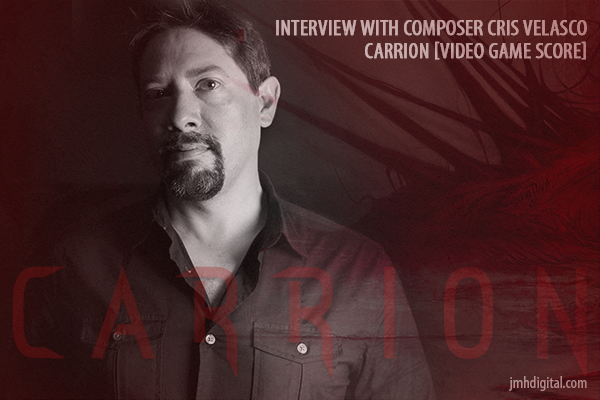 Carrion is a horror video game developed by Phobia Game Studio and published by Devolver Digital. Described as a "reverse-horror game", the game allows players to control a tentacled monster whose objective is to make its way through a facility, stalking and killing humans in its path. Carrion was released for Microsoft Windows, macOS, Linux, Nintendo Switch, and Xbox One.

Jeremy [Six Strings]: Tell us how you got involved with this project 'CARRION', what were your first thoughts on it?

Cris Velasco: I actually discovered CARRION on Twitter. This was WAY before it was an actual game. There was just this very cool, animated .GIF of the monster. Even though the style was very retro, the physics of the way the monster pulled itself around on its tentacles was amazing. I knew right then that I had to be a part of this, whatever it was! I reached out to Sebastian (one of only TWO people who developed this game) and told him how badly I wanted to be involved. This started out as a pure passion project for me, and has developed into a game and an experience that’s far exceeded my hopes.

Jeremy [Six Strings]: How did you approach this project 'CARRION' musically, do you have a process you follow?

Cris Velasco: There was a lot of initial experimentation with the music. At first, I tried a sort of John Carpenter route. It definitely would’ve worked I think, but we decided that CARRION needed something different and unique. So I started playing with some ideas that were one part Carpenter, one part Alien (Goldsmith), one part Penderecki, and many parts my own ideas. It’s sort of orchestra meets atonality, meets electronics, meets sound design for the most part. Two of the common threads that weave themselves through the score is (1) a ball of slime I recorded and turned into its own Kontakt instrument, and (2) the sound of a human heartbeat that becomes an anxiety-ridden percussion bed. 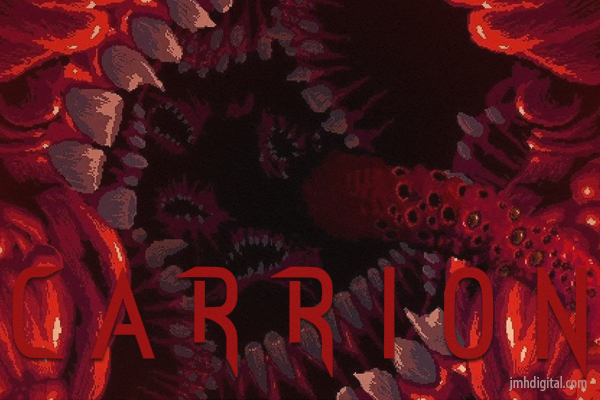 Jeremy [Six Strings]: Reaction has been quite good for 'CARRION', what do you hope the fans will take away from listening to the whole score?

Cris Velasco: CARRION is a score unlike anything I’ve done before. I honestly thought that although it worked well with the horrific game-play, that no one would be particularly interested in listening to it as a standalone soundtrack. It just seemed so weird and off-putting! I’ve been completely blown away by the amazing reception it’s received from people that love the game. They must be truly sick individuals! 😉

About: Cris Velasco is one of the most sought-after composers working today in media, scoring some of the world’s biggest video game franchises including Fortnite, Resident Evil, Overwatch, Bloodborne, Darksiders, Assassin’s Creed, Warhammer, Borderlands, Mass Effect and God of War, and television series such as HULU’s Dimension 404 and Freakish. He is also a passionate art collector, curating unique dark and surrealist art exhibitions in LA and Chicago including ‘Wunderkammer’ celebrating eclectic and visionary artwork from Clive Barker, and ‘From The Depths’ showcasing paintings paying homage to H.P. Lovecraft. Cris’ music is regularly performed in symphony concerts worldwide and has received numerous accolades including "Outstanding Achievement In Original Composition" from the Academy of Interactive Arts and Sciences, IGN’s People's Choice Award - Best Music, NBC News award for Best Video Game Music and Best Original Music nomination from the British Academy of Film and Television Arts. [http://crisvelasco.com/]

It's worth checking out the game and the score to "CARRION" and I wanted to thank Cris Velasco for talking with us again.