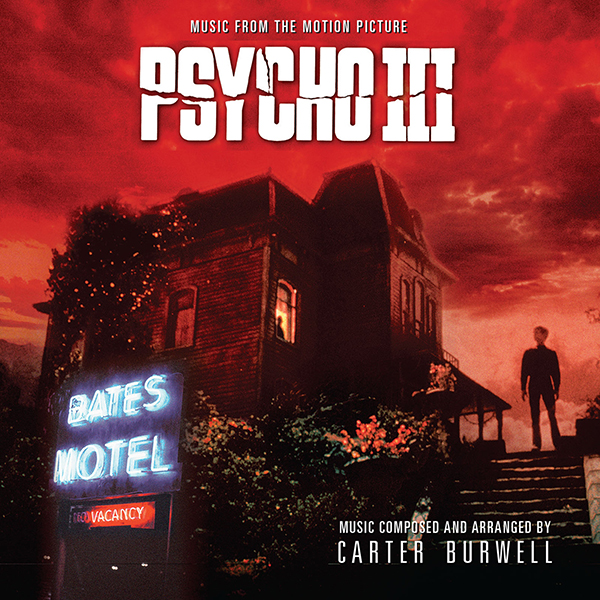 Intrada's first release of 2021 features the complete score to the 1986 Universal feature Psycho III with music by Carter Burwell. Norman Bates star himself, Anthony Perkins, took over directing duties and wanted a music approach that diverged from the previous Psycho films. Having been impressed with Burwell's score to Blood Simple, Perkins thought Burwell could provide the different sound for which he was looking. Burwell wrote a score performed primarily on the Synclavier, with additional live percussion, piano, saxophone and both women's and boy's choirs, taking heed of Perkins' guidance to avoid a strict traditional approach. Following in the footsteps of Herrmann and Goldsmith was no small task, but Burwell delivered a distinctive approach all his own and a perfect fit for the story in this next chapter of Norman Bates' life. The studio asked for a pop single as well, and the composer partnered with Stanton Miranda and Steve Bray to develop a song called "Scream of Love."

Released on MCA Records at the time of the film's theatrical run, the album featured dialog, excerpts from the score and source music. For this two CD-set, Intrada presents all the music Burwell recorded for Psycho III, in chronological sequence on the first disc. The second disc features the original MCA program, as well as all the different versions of "Scream of Love" recorded before finalizing the version he wanted to move into production. All this sourced from the 1/2" and 1/4" elements stored at Universal Studios.

The film begins mere weeks after the events of Psycho II, with a dark screen and an anguished woman’s voice crying out, “There is no God!” The voice belongs to Maureen Coyle, a novice nun plagued by doubts about her vocation, whose suicide attempt goes tragically awry for one of her fellow sisters. Fleeing the convent, Maureen finds herself at the Bates Motel, where another failed suicide attempt leads to an unexpected bond with Norman, who is haunted by Maureen’s resemblance to Marion Crane, the woman he killed decades earlier. Two newcomers jeopardize their relationship—Duane Duke, a sleazy would-be musician whom Norman hires as a desk clerk, and Tracy Venable, a journalist unconvinced that Norman has put his murderous ways behind him. Norman’s conflicted feelings toward Maureen lead to more murders, and at the end he willingly allows himself to be returned to the madhouse. But Mother still has her grip on him.