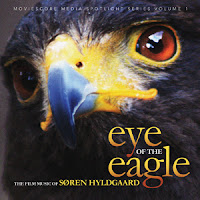 
Info: Launching a new series focusing our attention on talented film composers who gets the opportunity to showcase their versatility and impressive output, MovieScore Media has the immense pleasure to announce this CD featuring music by Danish composer Søren Hyldgaard as the first en try in our 'Spotlight Series'.
This is a great collection of themes from Søren Hyldgaard and represents a handful of his work brought to you in one place. It's beautiful, epic and moving... I don't say that all in one place, but it is all of those three. If you are looking for a good starting place with Søren Hyldgaard, I believe you have found it all in one. I have been listening to it for several sweeping hours and I just hit play over and over again. Listen to the samples on the main site and video below... you will to be amazed. This is the start of a series of his collective work, well I can say "I look forward to more releases".
-Jeremy [Retro-Zombie]
------------------------------------------
Hosted by Unknown at 2:01 AM