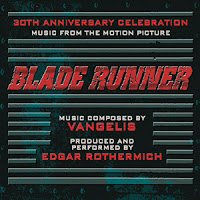 
BuySoundtrax Records seeks to rectify that, with this new recording faithfully recreating the original music from the film, which proved a difficult task.  Vangelis’ score was composed entirely by performing on keyboards and recording it directly, so no written transcriptions exist. Edgar Rothermich was charged with reverse engineering the score – listening to the original music and a 1982 album mock-up and transcribing it by ear.  He also had to recreate the sound of 1982 synthesizers and decipher if noise heard was due to recording on tape or stylistic choices by the composer.

“Blade Runner is the most difficult kind of score to deconstruct,” said BSX producer Ford A. Thaxton.  “Symphonic music can usually be determined because the instrumental palette is known.  But the 1970s-era electronic technology and the improvisational style in which Vangelis created the score made it especially difficult.  But we feel Edgar’s made a very close replication of what the score sounded like in the film.  He’s true to the sound the original but he’s brought it into today’s world.” 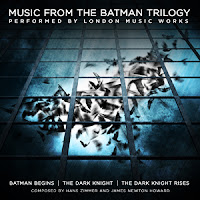 
Masterfully performed by the London Music Works and City of Prague Philharmonic Orchestra this unique compilation brings together the best score cues from Batman Begins, The Dark Knight and The Dark Knight Rises.

According to AllMusic.com, for Batman Begins, the Oscar-winning composers have “crafted an atmosphere that relies less on the dynamics of Danny Elfman and more on the rain-soaked soundscapes of Brian Eno and Blade Runner-era Vangelis.” 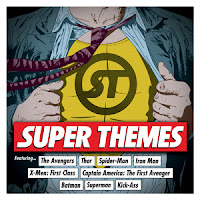 
SUPER THEMES gathers over 50 years of film and TV themes that accompanied adventures of the Super Heroes - men of steel, caped crusaders, web-slingers and many more.

From Neal Hefti’s hooky 1966 Batman theme all the way to Hans Zimmer’s contemporary sound for 2012 The Dark Knight Rises, the compilation underlines the caliber of composers (John Williams, Danny Elfman) involved and the everlasting quality of the themes.

3/5 As I do enjoy the idea of  the compilations, I do enjoy the original versions the best... though these do allow you have descent version.
-Jeremy [Retro-Zombie]
Hosted by Unknown at 12:01 AM