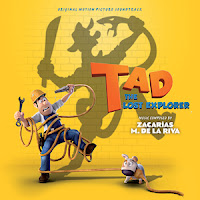 
“It is very well made and is nothing short of foreign productions with many more resources. One of the highlights is the score by Zacarías M. de la Riva.” (No Sólo Cine). Celebrating the great influence of such action film scoring heroes as John Williams, Jerry Goldsmith and Alan Silvestri, Spanish composer Zacarías M. de la Riva (Hierro, Imago Mortis) has written a truly entertaining and swashbuckling orchestral score for this feature film debut of Tadeo Jones – the animated adventurer who enjoyed great success already in two short movies also scored by de la Riva.
5/5  it is furiously fun... it has such a strong adventure vibe that on it's own generates a feel of some of the great adventure films... though separates itself to be a fresh telling.
-Jeremy [Retro-Zombie]
Hosted by Unknown at 12:03 AM