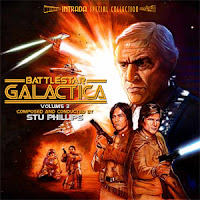 INTRADA Special Collection Vol. 210
When last we encountered the valiant crew of the Battlestar Galactica, they were plumbing the mysterious depths of space in search of the birthplace of humanity and battling through perils of snow and ice to defeat a terrible Cylon superweapon—all to the exhilarating and evocative music of maestro Stu Phillips. Epic tales and sweeping scores of this kind stood proudly at the heart of creator Glen A. Larson’s vision for the interstellar saga that was Battlestar Galactica. The demands of producing a lavishly budgeted weekly series, however, required that such multi-episode arcs not stand alone, and so Larson and his team were obliged to rapidly script and shoot a secondary slate of episodes that would be relatively self-contained and come with a more modest price tag, making the most of existing sets and costumes.

This third volume of music from Battlestar Galactica is dedicated to those single-episode tales that received new music (many episodes were tracked with existing music), as well as a bonus score from the short-lived spinoff Galactica 1980. Featured on this CD are the episodes "The Long Patrol," "The Lost Warrior," "The Magnificent Warriors," "The Young Lords," "Murder on the Rising Star," "Take the Celestra," "The Hand of God," and "The Return of Starbuck."

5/5, twice 5/5 Only terrific memories come from listening to this, it sounds great! Outstanding!
-Jeremy [Retro-Zombie]
Hosted by Unknown at 12:02 AM