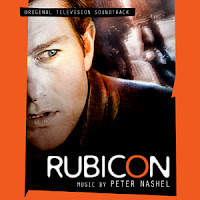 
Inspired by the suspenseful and high-stakes political whodunits of the 1970s -- from The Parallax View to All The President's Men -- Rubicon is a modern-day conspiracy thriller that taps into the collective paranoia of a post-9/11 era. Set at the New York City-based American Policy Institute (API), a federal intelligence agency, Rubicon follows Will Travers, a beleaguered and brilliant API analyst who, after being faced with a shocking tragedy, begins to uncover clues that could point to a complex and sinister conspiracy.
5/5 Television scores are sometimes better than movie scores, they have more time to flush out more pieces due to there is more to work with... this is a great moving dramatic score. Nice Work!
-Jeremy [Retro-Zombie]
Hosted by Unknown at 12:03 AM