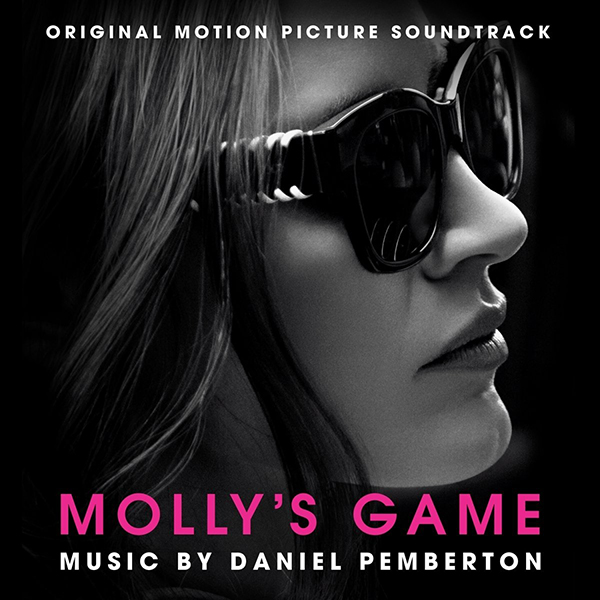 Sony Classical proudly announces the release of MOLLY’S GAME (Original Motion Picture Soundtrack), featuring music by Daniel Pemberton. The soundtrack to Aaron Sorkin’s directorial debut will be available on January 5, 2018. STXfilms and The Mark Gordon Company’s MOLLY’S GAME was released in select theaters in the U.S. on December 25th, and will expand wide on January 5, 2018.

“It was great working with Aaron - I still can’t believe this is his first time as a director - he was so assured, enthusiastic and supportive it felt like he’d been doing it all his life,” said Pemberton.

“When you’re directing a film for the first time—and I would imagine when you’re directing a film for the hundred and first time—you don’t want the top people involved to be soldiers who’ll carry out your instructions. You want them to be artists who are better than your instructions. At an early meeting with Daniel in Toronto, where much of MOLLY’S GAME was shot, I told the extraordinary composer that I wasn’t hearing electronic music in the score. Instead I wanted strings, reeds and brass—an orchestral sound. Daniel nodded, smiled his thousand-watt smile and said, ‘There will be electronic music,’” Sorkin joked. “Daniel became nothing less than a co-author of the film. And I’ll be forever grateful that he followed his instincts instead of my instructions.”

Starring Academy Award® nominee and Golden Globe Award winner Jessica Chastain, MOLLY'S GAME is based on the true story of Molly Bloom, an Olympic-class skier who ran the world's most exclusive high-stakes poker game for a decade before being arrested in the middle of the night by 17 FBI agents wielding automatic weapons. Her players included Hollywood royalty, sports stars, business titans and finally, unbeknownst to her, the Russian mob. Her only ally was her criminal defense lawyer Charlie Jaffey, played by Idris Elba, who learned that there was much more to Molly than the tabloids led us to believe.

Speaking to the dynamic score he crafted for this engaging true-life thriller, composer Daniel Pemberton said, "I wanted to write it so it felt a bit more like a bunch of different bands had written the score than rather a solitary film composer. I wanted it to feel like something that came from inside Molly’s world, the kind of music she would listen to or be surrounded by. It needed to feel contemporary, not like a traditional film score. But at the same time Aaron always wanted to give her a theme, one that would grow through the film into a big emotional resolution at the end, so it was important to work that into what I would do as well.”


DANIEL PEMBERTON: Composer Daniel Pemberton is an Ivor Novello-winning and multiple Golden Globe and BAFTA Award-nominated composer who has been regularly cited as one of the most exciting and original new voices working in modern film scoring today. His bold writing and unusual and innovative arrangements on scores for movies have seen the soundtracks constantly singled out for critical acclaim.  Pemberton’s mix of opera and electronics for Danny Boyle's STEVE JOBS (starring Michael Fassbender and Kate Winslet) not only garnered him a Golden Globe nomination for Best Original Score but so impressed writer Aaron Sorkin that Pemberton was invited to score his much anticipated directorial debut, the recently completed Molly’s Game.

Pemberton was nominated this year for a Golden Globe Award - Best Original Song for the song “Gold”, performed by Iggy Pop and from the film of the same name (for which he also composed the score) directed by Stephen Gaghan and starring Matthew McConaughey as well as Composer of the Year at the 2016 World Soundtrack Awards. He was previously honored as Discovery of The Year at the World Soundtrack Awards in 2014 for his work on The Counselor as well as the features Blood, In Fear, and Cuban Fury.

Pemberton’s big break into feature films came after Ridley Scott was so impressed with his debut film score in 2011 for the period supernatural thriller The Awakening that he hired the composer to score his feature The Counselor. The pair collaborated again on Scott’s first directorial foray into television, The Vatican and the upcoming Watergate feature Mark Felt: The Man Who Brought Down the White House, produced by Scott, directed by Peter Landesman and starring Liam Neeson. Pemberton’s latest collaboration with Scott is All the Money in the World, starring Mark Wahlberg, Christopher Plummer and Michelle Williams.  Other recent notable work includes his bold work on Guy Ritchie’s studio films “HE MAN FROM U.N.C.L.E.” and KING ARTHUR: LEGEND OF THE SWORD as well as acclaimed independent features such as last year’s Cannes Palm D’Or nominee MAL DE PIERRES starring Marion Cotillard and directed by Nicole Garcia.
Jeremy [Six Strings]
Hosted by Jeremy [Retro] at 9:00 AM