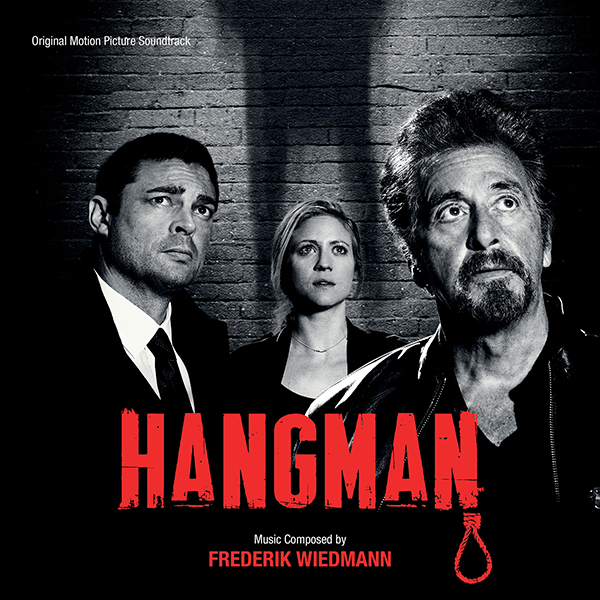 “When I read the script I immediately had a sense of what this film will have to feel like,” Wiedmann described.  Rather than gearing towards more traditional horror tropes, “we made the determination that we have a much stronger emotional component – a rather tragic backstory of our two detectives - that the score couldn’t ignore.”

In addition to a standard orchestral palette, “I did however use fair amount of solo cello, haunting solo vocals (by Ayana Haviv), and a heavy set of sound design/electronic elements, for a more modern sound,” Wiedmann explained.  He wrote themes for the characters, including one especially for The Hangman.  “Our detectives chase a serial killer that works in a specific pattern - making it impossible for the detectives to be a step ahead of him. Every time they see him at the crime scene, he smiles and gets away.  I tried to create something musically that underlines his smirk, his superiority. We ended up with a live-recorded soundbite of me laughing (kind of a mad laugh if you will), which we then distorted heavily and added other creepy elements to. This way, The Hangman was literally ‘laughing’ at the detectives inability to catch him.”

Emmy® Award-winning composer Frederik Wiedmann has compiled an interesting and varied résumé, with over 90 titles to his name encompassing all genres of film and television. Wiedmann is currently composing the music for two animated series (ALL HAIL KING JULIEN, MISSION FORCE ONE), has become a mainstay in the DC animated universe, and continues to score dramatic feature films.

In 2007 Wiedmann scored his first feature RETURN TO HOUSE ON HAUNTED HILL (produced by Joel Silver) and in the ten years since, his résumé includes horror films like THE HILLS RUN RED, HOSTEL PART III, MIRRORS II, THE DAMNED and INTRUDERS.  His dramatic work can be heard in the epic civil war drama FIELD OF LOST SHOES (directed by Sean McNamara) and Paul Schrader’s recent feature DYING OF THE LIGHT (starring Nicolas Cage and Anton Yelchin).

Twice Wiedmann has collaborated with DC mastermind Bruce Timm, first on GREEN LANTERN  - THE ANIMATED SERIES (which earned him 2 consecutive Annie nominations) and later with his twisted take on Batman, Superman and Wonder Women in JUSTICE LEAGUE - GODS AND MONSTERS.  He has also composed the music for DC Animation’s made-for-DVD movies JUSTICE LEAGUE - THE FLASHPOINT PARADOX, SON OF BATMAN, JUSTICE LEAGUE - THRONE OF ATLANTIS, and WB’s latest Batman TV Series BEWARE THE BATMAN.

In 2016 Wiedmann earned his first Emmy Award for “Outstanding Original Song” (with lyricist Mitch Watson) on the song “True Bromance” for the Dreamworks Animations series ALL HAIL KING JULIEN.  Wiedmann’s recent credits include the German TV mini-series DUELL DER BRÜEDER and the documentary short film SPECTRUM: A STORY OF THE MIND.