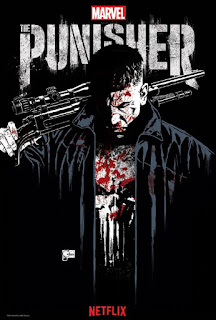 Let me tell you something, folks.  I am a huge fan of the Punisher.  I have the character's first appearance in THE AMAZING SPIDER-MAN #129.  I have just about every issue of every volume of the Punisher's main run of comics as well as a ton of his appearances in other characters' comics.  I think he is just the tops!  Superheroes are often the outsiders of society.  If that is so then Frank Castle is the outsider of outsiders.  He cannot rely on his superpowers to save the day because he has none!  What a fascinating hero in a world of super powered superheroes. I tell you all of this to assure you that this review is not going to be one of those "It sucks because the show isn't like the comics" kind of reviews.  I promise.  I will say, however, that Netflix's THE PUNISHER is terrible for so many other reasons.  Yea, that's right.  I didn't care too much for this show.  Everyone else seems to love it but I found the show to be a 13 hour endurance test of boring.  It's a thin unimaginative story populated with a bunch of characters that serve as oversize luggage that drag down and get in the way of anything interesting happening.  Oh, and the show is nothing whatsoever like the comics!

The story is another origin story!  Can you believe it?  How ballzy do you have to be to put out another origin story of the same version of the character?  It is like the creators of this show don't know what to do with this guy or are too afraid to write stories that concern what the Punisher actually does.  So in DAREDEVIL season 2 we are introduced to Frank Castle who is hunting down those who murdered his family.  By the end of the show he gets them all.  Now for his new show he discovers that there was one more person left and he spends the entire 13 episodes trying to find out who he is and kill him.  You can rest assure that season 2 of the PUNISHER will feature yet another character tied to the death of Frank's family that he will have to go after for another 13 episodes.