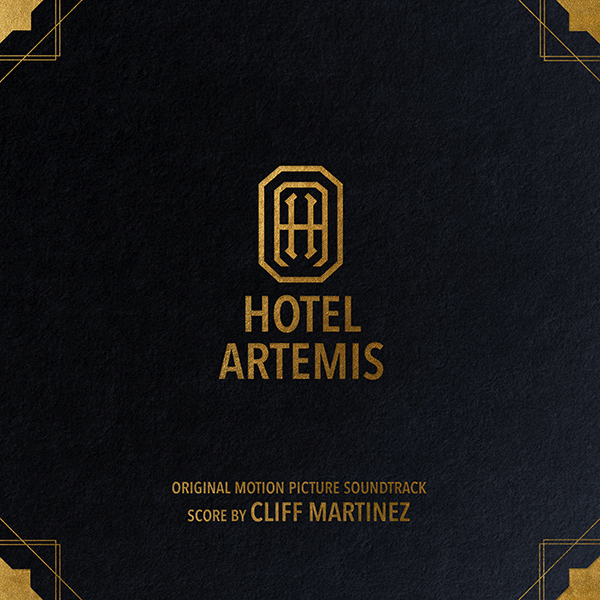 “I love being asked to get the band back together again.  Especially when the band is the team that released one of my career defining scores - Drive.,” said Martinez.  “Am glad to have gotten the call from Adam Siegel for Hotel Artemis and that Lakeshore will be releasing the soundtrack.  And we’ve struck creative gold again with Hotel Artemis. For best results, sit motionless between two speakers for the entire duration of the recording and bask in the uplifting and explulsive electronic mayhem.”

Perhaps it is because of his time in the punk scene as a drummer for bands including the Weirdos, Captain Beefheart and the Magic Band, the Red Hot Chili Peppers and The Dickies that Cliff Martinez’s approach to scoring is nontraditional.  His scores tend towards being stark and sparse, utilizing a modern tonal palette to paint the backdrop for films that are often dark, psychological stories like Pump Up the Volume (1990), The Limey (2009) Wonderland (2003), Wicker Park (2004), and Drive (2011).  Martinez has been nominated for a Grammy Award (Steven Soderbergh’s Traffic), a Cesar Award (Xavier Giannoli’s A L’origine), and a Broadcast Film Critics Award (Drive).  His score for The Neon Demon was awarded Best Soundtrack at the 2016 Cannes International Film Festival.

Still the drummer at heart, Martinez’s use of audio manipulations, particularly for percussive sounds, has been evolving through the years and is evident by the hammered dulcimer of Kafka (1991), the gray-areas between sound design and score for Traffic (2000), the steel drums and textures of Solaris (2002), what Martinez called ‘rhythmi-tizing pitched, ambient textures’ of Narc (2002), and ‘using percussion performances to trigger and shape the rhythmic and tonal characteristics of those ambient textures,’ as he described his score for 2011’s The Lincoln Lawyer.  Martinez’s longstanding relationship with director Steven Soderbergh began with 1989’s sex, lies, and videotape and has produced ten theatrical film releases, including Kafka, The Limey, Traffic, Solaris, and Contagion, and the critically acclaimed TV series The Knick.

Martinez’s films also include Nicolas Winding Refn’s The Neon Demon and Only God Forgives, Robert Redford’s The Company You Keep, Harmony Korine’s Spring Breakers (co-composed with Skrillex), and Martin Campbell’s The Foreigner, the Warner Bros. film Game Night and his upcoming projects include Too Old To Die Young – Refn’s new series for Amazon.  He was inducted into the Rock and Roll Hall of Fame in April 2012 with the Red Hot Chili Peppers.  He earned the prestigious Richard Kirk Lifetime Achievement award from BMI in 2013.