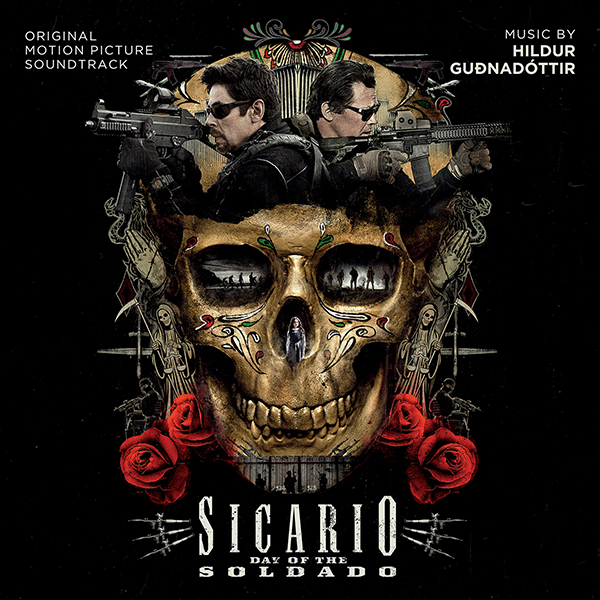 Music.Film Recordings and Varèse Sarabande will release the SICARIO: DAY OF THE SOLDADO  – Original Motion Picture Soundtrack digitally and on CD June 29, 2018 and on LP on August 31. The album features original score composed by Hildur Guðnadóttir (MARY MAGDALENE, Chernobyl).

The late Jóhann Jóhannsson received an Oscar nomination for the music he wrote for Sicario (also available via Varèse Sarabande). Guðnadóttir had collaborated with Jóhannsson on SICARIO and many projects over the years. “Jóhann and I worked together very closely on almost every single project we both did for about 15 years,” she said. “He passed away so recently, so I have not really digested that he is no longer here. But I don´t feel like I have picked up a baton, I am simply carrying on with the work that we were already doing. That feels both natural and very surreal, for lack of better words or digestion.”

With SICARIO: DAY OF THE SOLDADO, the series begins a new chapter. In the drug war, there are no rules – and as the cartels have begun trafficking terrorists across the US border, federal agent Matt Graver (Josh Brolin) calls on the mysterious Alejandro (Benicio Del Toro), whose family was murdered by a cartel kingpin, to escalate the war in nefarious ways. Alejandro kidnaps the kingpin’s daughter to inflame the conflict – but when the girl is seen as collateral damage, her fate will come between the two men as they question everything they are fighting for.  Directed by Stefano Sollima.  Written by Taylor Sheridan.  Based on Characters Created by Taylor Sheridan.  Produced by Basil Iwanyk, Edward L. McDonnell, Molly Smith, Thad Luckinbill, and Trent Luckinbill.

“I think SOLDADO is more emotional than the previous film, and the score follows that direction. This one is a bit more of a ‘classical’ score, with musical themes that follow certain emotional landscapes. That is something that was important to Stefano [Sollima, director],” Guðnadóttir explained that SOLDADO has “a bit of a different feel as a score because the function of it is different. That is also a direction that was important to Stefano. He was also very vocal about the fact that he did not want to recreate the SICARIO soundtrack, so he often wanted to go in very different directions from SICARIO.”


Hildur Guðnadóttir is an Icelandic cello player, composer and singer who has manifested herself at the forefront of experimental pop and contemporary music (e.g. with the band Múm). In her solo works she draws out a broad spectrum of sounds from her instrument, ranging from intimate simplicity to huge soundscapes. Her career as a film composer is soaring, having just signed on to score HBO’s limited series, Chernobyl, after recently completing the highly anticipated sequel, Sicario: Day of the Soldado, set to release summer 2018. Hildur’s film, Mary Magdalene, directed by Garth Davis (Australian nominated director for Lion) stars Joachem Phoenix and Rooney Mara, embodies an awesome soundtrack currently in release by Universal Music and will see a late fall US domestic release.  Her Nordic film, Tom of Finland, premiered at Tribeca this year, her score to The Oath garnered a Best Nordic Composer nomination and her score to Journey’s End awarded her the Best Music Award at this year’s Beijing International Film Festival. In addition to scoring, Hildur has performed in a number of film scores such as The Revenant (2015), Sicario (2015) and Arrival (2016).

Among others Hildur has performed live and recorded music with Skúli Sverrisson, Jóhann Jóhannsson, múm, Sunn O))), Angel, Pan Sonic, Hauschka, Wildbirds & Peacedrums, Ryuichi Sakamoto, David Sylvian, The Knife, Fever Ray and Throbbing Gristle. Gudnadóttir began playing cello as a child, entered the Reykjavík Music Academy and then moved on to musical studies/composition and new media at the Iceland Academy of the Arts and Universitat der Kunste in Berlin. Hildur has released four critically acclaimed solo albums: Mount A (2006), Without Sinking (2009), Leyfðu Ljósinu (2012) and Saman (2014). Her records have been nominated a number of times for the Icelandic Music Awards. Without Sinking was chosen as one of the albums of the year at the Kraumur Awards. Hildur’s albums are all released on Touch.

Hildur has composed music for theatre, dance performances and films. The Icelandic Symphony Orchestra, Icelandic National Theatre, Tate Modern, The British Film Institute, The Royal Swedish Opera in Stockholm and Gothenburg National Theatre are amongst the institutions that have commissioned new works by Hildur. She won Gríman (The Icelandic Theatre Award) in 2011, for her music for King Lear. And 2012 she was nominated for the Robert Prize (Danish Film Award) for her original score for A Hijacking. She was nominated for the Nordic Music Council Prize as composer of the year 2014. "Guðnadóttir takes a cello and gentle voice and, through software manipulation, scales simple phrases up to celestial heights" - The Wire: Adventures in Modern Music.