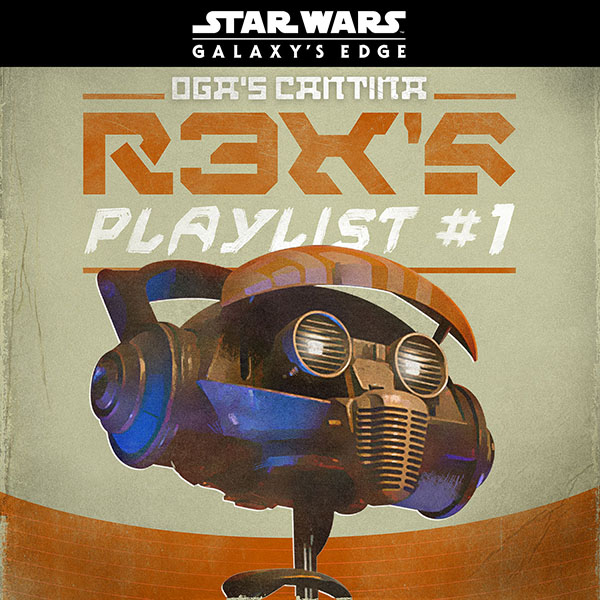 The songs featured on the album are written and co-produced by a wide variety of songwriters, all performed by a collection of “intergalactic” artists. The tracks are an “other-worldly” blend of various world musical styles, textures and rhythms. The lyrics are in multiple alien languages from throughout the galaxy, including Jawa and Huttese. Kicking off the top of DJ R-3X’s playlist is “Mad About Mad About Me,” a reimagined version of the original John Williams’ “Cantina Band” recording from “Star Wars: A New Hope.”

Executive album producer Matt Walker told Billboard.com in a recent interview, “We wanted this Cantina to fit within the story of the land, and I gave music producer Yaron Spiwak that challenge to figure out ‘What are the intergalactic hits that our droid DJ would collect and play for this motley group of questionable clientele in this far end of the galaxy?’ Create this playlist. Go.”

Music producer and imagineer Yaron Spiwak said, “R-3X’s playlist was created to draw listeners into life on the planet of Batuu, giving them a better sense of its people, their music tastes and its pop culture – past and present. Each song on the playlist tells a story, from a Gungan celebration song and an Huttese rap to an exciting mix of styles and languages from all over the galaxy. This set includes the classic hits that play regularly on R-3X’s rotation in Oga’s Cantina and on radio stations heard throughout Black Spire Outpost.”

For more information on Walt Disney Records releases, follow us at Facebook.com/Disney, Instagram.com/disneymusic.,Twitter.com/disneymusic and our Disney Hits Playlist at http://disneymusic.co/DisneyHits.