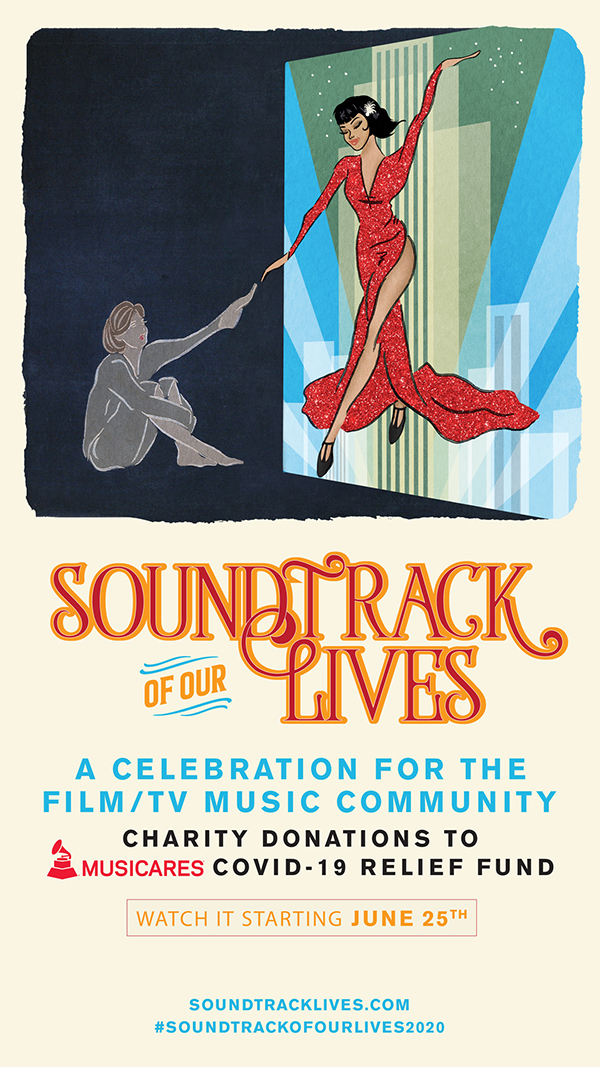 Members of the Film & TV Music community, made up of composers, songwriters, music editors, music supervisors, studio executives and more, are contributing their talents to SOUNDTRACK OF OUR LIVES: A CELEBRATION FOR THE FILM & TV MUSIC COMMUNITY, an online benefit event for MusiCares® COVID-19 Relief Fund. This specially produced program debuts June 25th, 2020, at noon pacific on YouTube, and will honor the talented people whose scores and songs transport, inspire, uplift and entertain us by creating the “soundtrack of our lives.” The fun, delightful and heartfelt hour-long special will feature leading and iconic singers, composers, songwriters, actors, celebrity guests and others while celebrating glorious Film & TV Music moments with heart and humor. Donations to MusiCares®COVID-19 Relief Fund will be encouraged throughout the show.

“Thousands of music professionals and creators are struggling during this pandemic and remain in desperate need of assistance,” says Debbie Carroll, Vice President Health and Human Services MusiCares. “The continued support from the music community during these turbulent times has been heartwarming and inspiring. The power of music unites us all and gives us hope for better days ahead.”


Over 75 film and television composers and songwriters, “From A to Z, Abels to Zimmer,” will appear in this program. Collectively, this prestigious group has been nominated for 273 Grammys (with 87 wins), 216 Emmys (with 51 wins) and 136 Oscars (with 34 wins).


Some highlights of the special include:

Tony Award winner and Disney Legend Anika Noni Rose highlights the history of African American composers, songwriters, and artists who have contributed to the Film & TV Music industry through the years.

Performers Danny Elfman, Catherine O’Hara, Paul Reubens and Ken Page reunite to perform a song from the film The Nightmare Before Christmas.

Various performers, including members of the original cast of La La Land, sing a parody version of “Another Day of Sun.”


William Shatner explores how different scores can give the same film a different meaning as an exasperated director, played by Richard Kind, leads a composer in multiple directions for a short film starring Kiernan Shipka and Christian Coppola.


MusiCares® COVID-19 Relief Fund was created by MusiCares® to provide support to the music community during the pandemic crisis. The music industry has been essentially shut down with the cancellation of music performances, events, festivals, conferences and the many other live events that are the cornerstone of the shared music experience. Since the fund's establishment in March, over 14,000 clients have been served, with many more still needing help.  Show co-creator Peter Rotter says: “When the pandemic tragically hit our world and began to shut down our film music community, I felt that something needed to be done to help those who were in need of support and care. Through MusiCares® we have found the charitable vehicle that can come alongside our hurting musical family.

“Music has always played a role in history; reflecting both the subtle and monumental moments of our lives through its unique DNA. Music connects each of us, acting as a common thread of unification, opening the hearts of all people.

“Regardless of the color of one’s skin, status or station in life, music powerfully breaks through boundaries as its message permeates deep within us; healing our human frailties and condition at our cores. Music is transformative and personal. It powerfully underscores our lives.”

“Music has always helped transport, uplift and inspire us through wars, economic hardships, health crises and societal upheavals,” says show co-creator, Richard Kraft. "When COVID-19 hit, it threatened the lives and livelihood of much of our Film & TV Music community. So, we decided to create an online special that both celebrates the soundtrack of our lives and benefits, via MusiCares®, the artists who create it.”


For more information on how to apply for financial assistance visit: www.musicares.org


SPECIAL THANKS TO SOUNDTRACK OF OUR LIVES PATRONS
Thank you to MusiCares® for working with SOUNDTRACK OF OUR LIVES to uplift the Film & TV Music community in a substantial way during this difficult time. Thank you to Rolling Stone and Variety for coming together to co-host this special on their YouTube channels. And thank you to the many companies and organizations that have donated time, money and resources to the execution of this project, including Alliance for Women Film Composers, Amazon Studios, Costa Communications, Encompass Music Creative, Enthrall Creative, Greenlight Creative, Warm Butter Design, White Bear PR, the Guild of Music Supervisors, the Society of Composers and Lyricists, Christine Bergren Music Consulting, SAG/AFTRA, Technicolor and many more.


ABOUT MUSICARES®
A friend and ally of the music community, MusiCares® was established by the Recording Academy to safeguard the health and well-being of all music people. A four-star charity and safety net in times of need, MusiCares® offers confidential preventive, recovery and emergency programs to address financial, medical and personal health issues. Through the generosity of our donors and volunteer professionals, our dedicated team works across the country to ensure the music community has the resources and support it needs. For more information please visit www.musicares.org.


ABOUT THE RECORDING ACADEMY
The Recording Academy represents the voices of performers, songwriters, producers, engineers and all music professionals. Dedicated to ensuring the recording arts remain a thriving part of our shared cultural heritage, the Academy honors music's history while investing in its future through the GRAMMY Museum®, advocates on behalf of music creators, supports music people in times of need through MusiCares® and celebrates artistic excellence through the GRAMMY Awards® — music's only peer-recognized accolade and highest achievement. As the world's leading society of music professionals, they work year-round to foster a more inspiring world for creators.