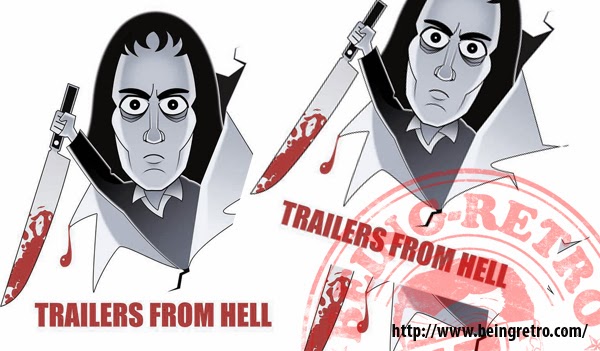 For the First Time in the United States and Canada, the Series Will Come to Television as Special Interstitial Content on FEARNET’s Linear Channel
SANTA MONICA, CA - January 30, 2014 - FEARNET has summoned the forces of Trailers From Hell to the VOD platform, launching Monday, February 17. Fans of FEARNET’s linear channel will also be able to enjoy TRAILERS FROM HELL, as the series comes to television in the form of special interstitial content. The hit series, created by fan-favorite genre filmmaker Joe Dante (GREMLINS, THE HOWLING), takes a look at film trailers—both old and new, from the obscure to the well-known—and gives them a unique spin, adding fresh, funny, and insightful commentary from an impressive roster of acclaimed insiders and experts.

In addition to Dante, past contributors include Ti West (THE HOUSE OF THE DEVIL) on PEGGY SUE GOT MARRIED; John Landis (AN AMERICAN WEREWOLF IN LONDON) on IT’S A WONDERFUL LIFE; Troma founder Lloyd Kaufman on his cult classic THE TOXIC AVENGER; B-movie maestro Roger Corman (THE TERROR) on TALES OF TERROR; Mick Garris (MASTERS OF HORROR) on HUMANOIDS FROM THE DEEP; Edgar Wright (THE WORLD’S END) on Suspiria; Guillermo del Toro (PACIFIC RIM) on Zombie; Stuart Gordon (RE-ANIMATOR) on Mr. Sardonicus; Eli Roth (HOSTEL) on Creepshow; Oscar-winning makeup guru Rick Baker on How to Make a Monster; and many more!

“The partnership of FEARNET and TRAILERS FROM HELL is a natural, as we both enjoy spreading the word about the genre films that we love or believe should be more widely known,” Dante said. “TRAILERS FROM HELL provides filmmakers with a way to share their fascination with movies of the past and present, that influenced their work or made them want to make movies in the first place. We're thrilled to join with FEARNET to celebrate the good, the bad and the ugly.”

“We’re very excited to bring TRAILERS FROM HELL to FEARNET’s VOD and linear platforms,” said Sarah Shannon, vice president, programming and network operations, FEARNET. “With its light-hearted take on genre favorites, the series is a perfect fit for the eclectic brand of programming we specialize in. I think our audience is really going to enjoy it.”
Hosted by Jeremy [Retro] at 11:21 AM