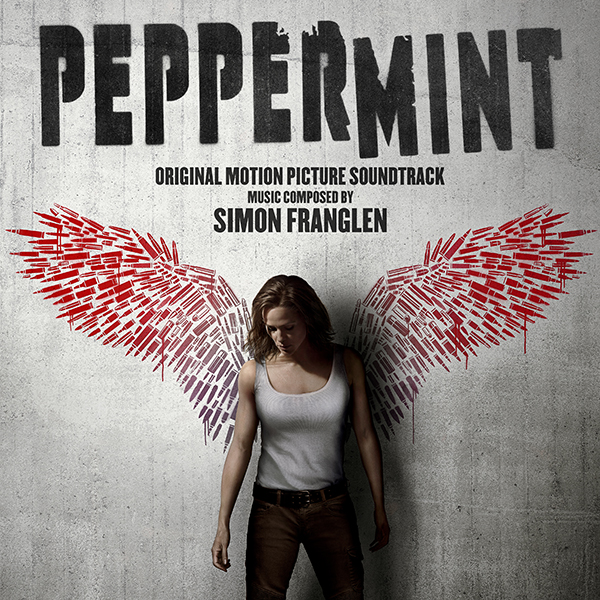 “PEPPERMINT has a raw edge as a movie, the open wounds of the lead character, Riley North, are both physical and mental,” said Franglen. “The music needed to show two distinct sides, inside and outside Riley’s head. It had to reflect her emotions as well as propel the action and tension as any thriller score should.”

PEPPERMINT is an action thriller which tells the story of young mother Riley North (Jennifer Garner) who awakens from a coma after surviving a brutal attack on her family that killed her husband and daughter. When the system frustratingly shields the murderers from justice, Riley sets out to transform herself from citizen to urban guerilla. Channeling her frustration into personal motivation, she spends years in hiding honing her mind, body and spirit to become an unstoppable force – eluding the underworld, the LAPD and the FBI- as she methodically delivers her personal brand of justice.

Franglen continued, “The action side has a pulsing low end - distorted percussion and guitars, bowed acoustic instruments, modular synths and audio manipulation. There’s a 60-piece orchestra with added low strings to enhance the bass, especially in the quiet tension sections. I used cellos and basses as the primary instruments rather than violins. The emotional side uses piano, solo cello, softer strings, I often added distant echoes to allow phrases to linger in the background rather than overwhelm.”

Franglen is a Grammy-winning and Golden Globe-nominated composer and producer. He received a Grammy Award for Record of the Year as producer of “My Heart Will Go On” from James Cameron’s “Titanic,” and received Golden Globe, Grammy Award and World Soundtrack Award nominations for his work on Cameron’s “Avatar.” His recent work includes composing music for two films with Terrence Malick, including his stunning “Voyage of Time,” multiple projects with Jean-Jacques Annaud and Antoine Fuqua, including “The Magnificent Seven” and working with Pink Floyd, producing 3D mixes for “Their Mortal Remains” which was recently experienced by 400,000 people in London.

London-born, Simon moved to Los Angeles in the 1990’s. Over the next decade, he built a reputation as a top musician and producer, working with an array of pop and R&B artists including Michael Jackson, Whitney Houston, Quincy Jones, Celine Dion and Madonna. He worked with numerous film composers including James Horner, John Barry, Howard Shore and Alan Silvestri. He created the innovative electronica for the scores for David Fincher’s seminal “Se7en” and Cameron’s “Titanic.” Franglen served as arranger for Horner’s scores for “The Amazing Spider-Man” and “Avatar.” He also served as arranger on Thomas Newman’s scores for the James Bond films “Spectre” and “Skyfall.”

“Pierre Morel is a composer’s dream as a director; he’s knowledgeable, supportive, and has great instincts.” Franglen concluded, “The score reflects his musical sensibilities. In one particular cue, his suggestions led me to throw the whole orchestral recording through a time-stretcher to mangle it. Totally un-purist, but it totally worked. It was a true collaboration. Themes wind their way through the 70 minutes of score; there are moments when music is allowed to be front and center, but in general this score is there to enhance, not compete.”