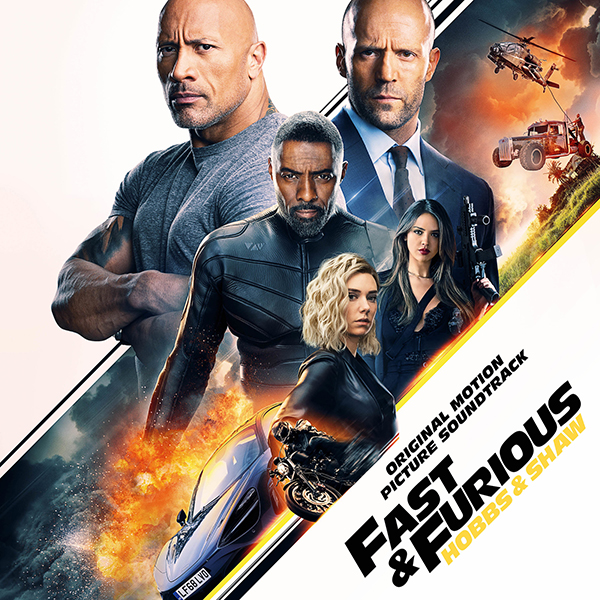 The soundtrack to Universal Pictures’ action-thriller features new music by YUNGBLUD, Idris Elba feat. Cypress Hill, Aloe Blacc, Tyler Bates and more
Back Lot Music will release the original motion picture soundtrack to Universal Pictures’ Fast & Furious Presents: Hobbs & Shaw this Friday, July 26th. The soundtrack features a variety of musical styles that reflect the eclectic energy of the film; everything from British Rock to hip-hop to electronic and even Samoan. The soundtrack will release one week ahead of the film’s theatrical release on August 2nd. Fans can pre-order & pre-save the album now at all major DSPs.

The lead track “Time in a Bottle” is a cover of a Jim Croce song performed by one of the hottest rising stars in alternative rock: YUNGBLUD. About to embark on a fall tour entitled Twisted Tales of Ritalin Club Tour, YUNGBLUD hails from Northern England and brings an explosion of raw energy to his reinterpretation of a classic track that bookends the film. Yungblud (aka Dominic Harrison) says he “was so excited when we were sent the brief. The song’s an absolute classic that my grandfather used to play! [It] was good to mess it up a little.”

One of the stars of Hobbs & Shaw – Idris Elba – contributes two versions of his song “Even If I Die” feat. Cypress Hill. A remixed version by British group Hybrid is featured in the film, while the original version serves as a bonus track for the album. As Elba told EW.com when it debuted the track, “This is such a great tune for the film!! I got the chance to make a track with legends Cypress Hill for legendary franchise Fast and Furious....Selector!!!”

Aloe Blacc also contributes two songs to the film, one of which was created in partnership with NBC’s hit show Songland. In the show, prospective songwriters vie for the chance to work with top producers and have one of today’s top recording artists record their track. On the July 2nd episode where Blacc was featured, the contestants were able to meet with director David Leitch to hear more about Hobbs & Shaw and write a song specifically for a scene in the film. The result of that partnership is “Getting Started (Hobbs & Shaw)” feat. JID. See more about the making of the song in this exclusive digital clip: https://youtu.be/tLOWzBvSA3o

Tyler Bates has composed the score for Hobbs & Shaw and rounds out the soundtrack with a score suite aptly titled “Hobbs & Shaw Rocks!” Having worked with director Leitch on the entire John Wick franchise, Deadpool 2 and Atomic Blonde, Bates has again created a score that can keep pace with Leitch’s high- stakes action sequences. “Creating the score for Hobbs & Shaw was an absolutely wild ride,” says Bates. “David Leitch ran through a wall, and every department followed his lead to make an incredibly entertaining movie that has heart & humor, and that rocks hard with a thousand guitars from start to finish.” A separate soundtrack featuring the entire score is slated to release day and date with the film on August 2nd.

Other previously unreleased tracks on the album include A$ton Wyld’s “Next Level,” Brothers Voodoo’s “Keep You Alive,” “F.W.T.B. (grandson Remix)” by YONAKA, “I’m Coming Home” by Aloe Blacc & AG, and a new version of Ohana Bam’s “All Roads Lead Home,” which features Token.